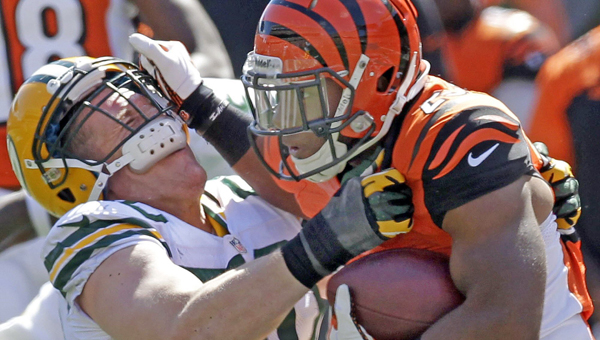 CINCINNATI (AP) — The Bengals solidified their linebacker position by agreeing to a two-year deal with free agent A.J. Hawk and tendering an offer to Emmanuel Lamur on Tuesday.

They also offered a one-year deal to defensive tackle Devon Still, whose daughter is fighting cancer. Still will have to decide whether to stay in Cincinnati while his 4-year-old daughter, Leah, is treated on the East Coast.

Hawk, a nine-year veteran, grew up in Ohio and attended Ohio State. He visited the Bengals as free agency started on Tuesday, and agent Mike McCartney tweeted that they’d reached agreement on a two-year deal. The Bengals didn’t confirm the agreement.

Linebacker was one of Cincinnati’s priorities for improving in the offseason. Rey Maualuga agreed to a three-year deal last week, avoiding free agency. Vontaze Burfict missed most of last season with concussions and torn knee cartilage and had two knee operations, leaving his status uncertain.

Lamur is a restricted free agent who can negotiate with other teams, but the Bengals can match any offer. Lamur moved into a starter’s role last season, when Burfict and Maualuga missed significant time with injuries. He ranked third on the team with 90 tackles, intercepted two passes and knocked down seven throws.

The Bengals also tendered cornerback Chris Lewis-Harris, the Bengals retained their rights to the third-year player. He played in 10 games over the past two seasons, mostly on special teams.

Still played in 12 games last season and had 19 tackles without a sack or interception. He flew back to Philadelphia to visit his daughter whenever possible. By offering Still a one-year deal rather than making a tender offer, the tackle has more flexibility in choosing his future.

The Bengals said Still is considering the one-year offer “based upon what is happening with his family.”

Leah Still was diagnosed with pediatric cancer and had a tumor removed from her abdomen. She had her latest course of chemotherapy in late February. The Bengals helped with a campaign to sell Still’s jersey for $100 apiece, with the money going to research for pediatric cancer. More than $1 million has been raised.