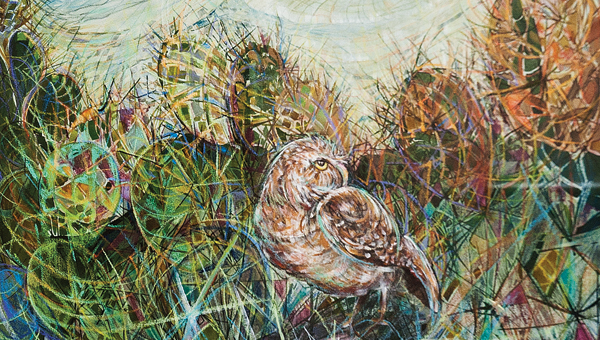 “Owl in the Desert,” pencil and ink on paper.

Prince’s work is abstract and covers a wide range of subject matter.

In the last decade Prince has received her master of fine arts from Memphis College of Art, taught at numerous post-secondary institutions including Clemson University, served as an art administrator for a community arts program, exhibited works throughout parts of the country and attended artist residency programs at Vermont Studio Center and the Hambidge Center for Arts and Sciences.

The exhibit features a number of her works from five different series of hers; Mapping Imagination, the Convergence Series, the Messenger Series, the Icon Series and the Transformation Series.

“Regardless of my subject or each theme, each new work is a journey, the journey of my imagination as it builds highly subjective idealized worlds into a form for others to share,” she said in her statement. “In every variation, I attempt to unveil the visions that are my most thoughtful interactions with the world.”

Basketball strengthens through special ministry   Eric Bailey and T.J. Howard had a vision to better the youth group of... read more