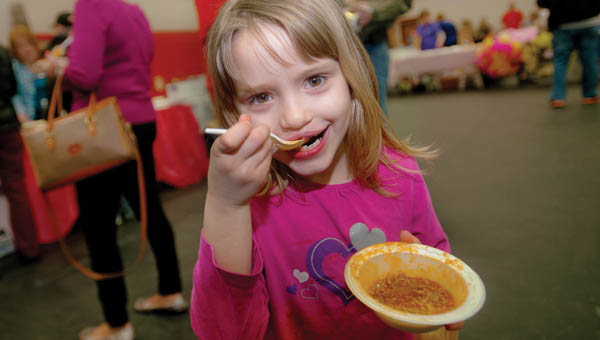 Six-year-old Abby Cox, of Greenup, enjoys her chili as she and her family make the rounds during the Chili Fest and Craft Show for DD Awareness Saturday at Dawson-Bryant High School.

COAL GROVE — The chili experts were out in full force on Saturday as the Lawrence County Board of Developmental Disabilities celebrated another Chili Fest and Craft Show at Dawson-Bryant High School.

Not even the downpours that have plagued the Tri-State could stop these lovers of chili or those wanting to support the board of DD. The chili fest is one of three events in March dedicated to raising awareness about the programs at the Open Door School and Tri-State Industries.

This year there were 22 organizations joining in to make their own special chili and some even brought a couple of different kinds for patrons to sample.

“We have had a lot of volunteers,” Tim Nunnery of the board, said at the opening of the event. “Collins Career Center and the Lawrence County Juvenile Center helped us set up. There were no problems.”

New to the fest were representatives from the Holiday Inn Express and Suites and featured the chili of Giovanne Walker, who started working on the slow-cook dish early Friday morning. She used a recipe handed down from her mother that featured deer meat.

The staff at Spectrum are veterans of the chili fest, this year offering what they called “Chili…Chili…Chili.”

“This is a heart healty chili recipe and we switched from ground turkey to lean ground sirloin,” Andie Leffingwell of Spectrum said. “And there is a chili pepper paste and we soaked the kidney beans in it.”

Joining her were the 3 Amigoes, complete with fuzzy and fake moustaches — Nicole King, Amber Rawlins and Rindy Baker.

“It is a nice hearty stew,” he said. “I start it all from scratch.”

It was only fitting that National Wild Turkey Federation chapter president Larry Pernestti’s entry used, you guessed it, wild turkey while Tony Howard of the Ironton Lions Club put two pounds of steak meat in his dish.

Serving up Jay Zornes recipe at the table for the Ironton Rotary Club was member Carl Darling.

“This is a nice way to raise money,” Darling said. “Both are having fun — the people eating and the people serving.”

Strike still on at refinery

Mike Roark, left, and Curt Maynard, right, hold a sign at the corner of the Speedway gas station along 13... read more