Kentucky No. 1 seed in NCAA quest for unbeaten season 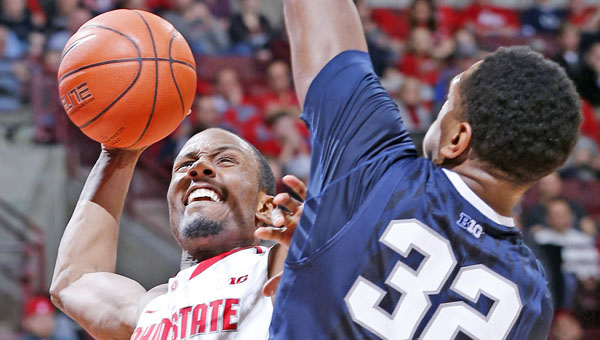 Ohio State’s Sam Thompson (12) goes for a jam during a game against Penn State. The Buckeyes will play Virginia Commonwealth on Thursday in the NCAA Tournament. (MCT Direct Photos)

The Kentucky Wildcats ended up where everyone expected them on Selection Sunday: Seeded No. 1 on their quest to become the first undefeated team since 1976.

Oh, but there were surprises when the NCAA Tournament bracket came out, too.

Big-conference UCLA and Texas made it. Colorado State and Temple did not.

Wisconsin is a No. 1 seed for the first time in program history. But the Badgers must play in the West Region, where second-seeded Arizona is certain to draw more fans.

As for those play-in games that start Tuesday in Dayton. Well, one of the teams playing is Dayton — a No. 11 seed that will have a distinct home-court advantage Wednesday night against Boise State. Generally, that’s not allowed during the tournament, but there’s an exception because the committee said the Flyers were the last team in the 68-team field, and thus, had to play in the opening-round game.

“It falls within our policies and procedures,” selection committee chairman Scott Barnes said. “It’s obviously a home-court advantage but we didn’t waver from that decision.”

Fans have a few days to fill out their brackets (Sorry, no billion-dollar prize available for a perfect one this year), then the action starts in full on Thursday, when Kentucky headlines the slate against the winner of a play-in game between No. 16 seeds Manhattan and Hampton. A ‘1’ has never lost to a ‘16.’

The other No. 1 seeds were Villanova in the East and Duke in the South. Those were pretty easy picks.

And then there was the total no-brainer — placing Kentucky at the top of the Midwest Region, and at the very top of the bracket. The Wildcats defeated Arkansas 78-63 on Sunday to improve to 34-0. If they win six more, they’ll become the first team since then 1975-76 Indiana Hoosiers to go undefeated.

“I think I have the best team and the best players,” said coach John Calipari, trying to lead the program to its ninth national title. “Does that mean we’ll win? No, it doesn’t.”

The Wildcats are even-money picks in Las Vegas to win it all, and at least one coach, Bill Self of Kansas, thinks that might be a bargain.

“I shouldn’t be talking about Vegas, but my point is, I think they’re a pretty heavy favorite,” said Self, whose Jayhawks are seeded No. 2 in the Midwest.

Other No. 2 seeds are Gonzaga in the South and Virginia in the East.

Barnes said Arizona and Virginia were the other teams in the mix for the top seed. He defended placing Duke there, saying the Blue Devils’ road wins over Virginia, North Carolina and Louisville carried more weight than their lack of a conference title.

“Those strong, very elite wins, wins on the road — and let’s not forget the eye test with Duke — all were considerations,” he said.

Barnes called placing UCLA in the bracket as a No. 11 seed “one of the tougher decisions we had to make.” But he defended putting the Bruins (20-13) in with an RPI of 48, which is 18 spots lower than Colorado State and 14 below Temple.

“We felt they were gaining steam,” Barnes said. “They did have a good strength-of-schedule, they were playing better against tough competition. An example is the last game against Arizona (a 70-64 loss in the Pac-12 title game). I think the ‘eye test’ was also a plus in putting them in the field.”

The Big Ten and Big 12 led the way with seven teams each in the bracket.

Other teams that just missed were Old Dominion and Richmond, which lost out to teams like Ole Miss and Texas that have stronger schedules baked into the cake because they play in major conferences.

As is custom, Barnes was short on specifics, though he said Wyoming’s surprise victory in the Mountain West Conference stole away an at-large bid that would’ve gone to Temple — the last team out.

The next team out was Colorado State. Rams coach Larry Eutaschy broke away from his team’s “viewing party” to make a brief statement.

“They are devastated, and they should be, because they are certainly an NCAA Tournament team,” Eustachy said.

The bracket includes its usual share of quirks and tear-jerkers.

—UCLA’s first game is against SMU, coached by Larry Brown, the 74-year-old turnaround artist who is taking his third team to the NCAA Tournament. The first team? UCLA, of course.

—Georgia State coach Ron Hunter watched the bracket unveiling with his left foot in a cast. He tore his Achilles’ tendon while celebrating his program’s first trip to the tournament since 2001. The 14th-seeded Panthers open against Baylor.

—Also seeded No. 14 is Albany, which made the tournament on a 3-pointer with 1 second left by Peter Hooley, whose mother died six weeks ago from colon cancer. No. 14 Albany opens against Oklahoma.

—Wichita State is in the same region with Kansas, an in-state program that won’t schedule the Shockers, and Kentucky, which ended Wichita State’s undefeated season last year in the second round.

This year, it’s Kentucky that comes in with a ‘0’ in that loss column.