Slight delays on new Ironton-Russell Bridge construction due to weather 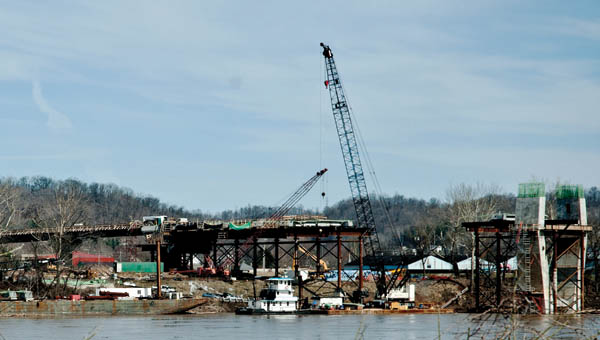 View of construction of the new Ironton Russell Bridge from the Russell, Kentucky, side.

The construction of the new Ironton-Russell Bridge is slightly behind schedule due to recent weather conditions.

“We’ve had some delays on the Ohio side due to the river level,” Kathleen Fuller, public information officer for Ohio Department of Transportation of District 9, said. “We’ve lost about at least two weeks. Two weeks is significant, but we’ve continued working.”

The water level on the Kentucky side of the bridge is not as high as on the Ohio side, so they have been able to work on that side’s tower, she said.

Fuller also said that the Kentucky side’s tower will be finished first with the goal of late spring, while the goal for the tower on the Ohio side will roughly be finished by the fall. The bridge is not expected to be finished until the late summer or early fall of next year.

“When both towers are complete, they will start setting the form traveler to start the span of the bridge,” Fuller said. “They work from each side toward the middle.”

ODOT is in the process of planning a tour in May for people to see how much of the bridge is completed so far, Fuller said.

“Time wise, we are more than 60 percent of the way there,” she said. “When the towers are done, everything else seems to go more quickly.”

A man who was indicted for burglary in 2013 was recently arrested and arraigned Wednesday in Lawrence County Common Pleas... read more