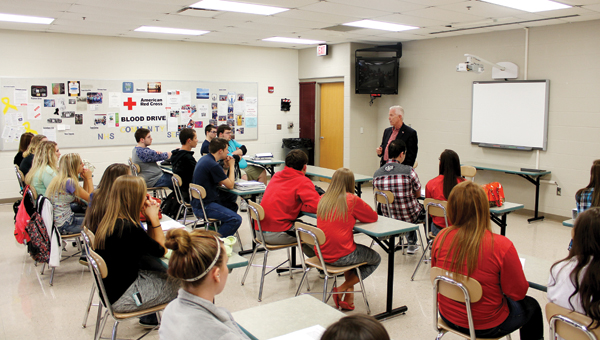 Congressman Bill Johnson talks about a number of topics to students on Monday afternoon at Rock Hill High School.

“This is the most fun part of my job because you’re the reason that I do what I do,” Johnson said to the students. “I’ve got four children, six grandchildren and my objective is to leave our country in a better place when I check out than when my parents gave birth to us. That’s a heavy lift, and what I want to press upon you today is how important your role in the future is going to be.”

Johnson spoke to the students about the importance of their role in the country’s future, to chance to vote coming up at age 18, his background and growing up with a farming family as his mother was a tobacco farmer, his military background in the Air Force some of his day-to-day duties. He also answered a few questions from students.

In November of last year, Johnson was elected to his third term as the U.S. Representative for Ohio’s 6th District and has offices in Ironton, Marietta, Salem and Cambridge.

“To have the opportunity to have a U.S. Congressman come in and talk about current events in our country is a wonderful experience for the students. With the background and integrity that he has, we are very privileged,” Rock Hill superintendent Wes Hairston said. “He answered every question that was asked. He was very open.”

Prior to speaking to the students at the high school, Johnson ate lunch with the middle school quiz bowl team and met with Hairston, school board members and the principals of all of the Rock Hill schools.

In 2010, then U.S. Representative of Ohio’s 6th District Charlie Wilson visited Rock Hill for a football game, but this was the first time students got to speak to a congressman, Hairston said. This was Johnson’s first time at Rock Hill.

“It’s not about being Democrat or Republican or being liberal or conservative,” Hairston said. “For us, it’s about the opportunity that we have to listen to someone that represents the U.S. government.”

COAL GROVE — An investigator from the state fire marshal is expected today on the scene of an early morning... read more