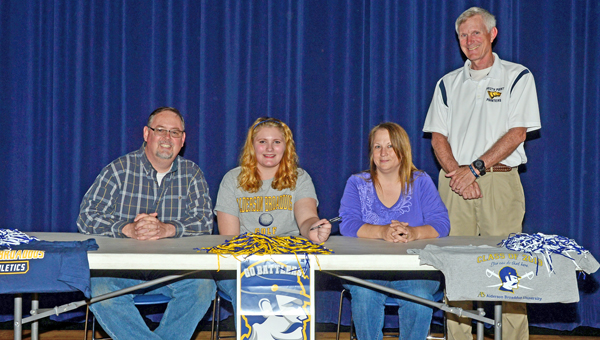 For Collins — a South Point Lady Pointers’ senior — what started as a joke has turned into quite a golf career.

And that career will continue after she signed a scholarship with Alderson-Broaddus on Wednesday.

Collins didn’t start playing golf until the eighth grade and she did it as at first as a joke towards her father.

“It actually started as a joke. We were flipping through TV one day and the Golf Channel was on and my dad said, “Oh, let’s watch this.’ And we were “No, no, golf is so boring.’ And he said, ‘One day one of you will like it.,’” said Collins remembering that fateful day.

So with a little practice, Collins tried out for the middle school team only a week later.

“I made it and the rest is pretty much history,” said Collins.

Now, golf isn’t a joke to Collins. In fact, it is one thing that really makes her happy as well as challenging her.

“With golf, you’re not playing against other people. You’re playing against yourself and I really like it because I’m the one who controls my score. Nobody else controls it. I don’t have to worry about a teammate not being where they’re supposed to be. It’s all up to me.”

“The coach is a really awesome guy. He always reaches out. He calls me every week and asks me how I’m doing,” said Collins.

But she quickly noted that having a good relationship with the coach doesn’t mean anything once she hits the golf course.

“I am in scholarship, but that does not guarantee I’ll play. I have to go up there and perform. If I don’t, then I won’t play,” said Collins.

Alderson-Broaddus and Central Christian College of Kansas were her final two choices, but she opted to remain closer to home.

“It just really felt like home. I knew I could be away from my family and still stay there and feel at home,” said Collins.

“The facilities are beautiful. I couldn’t see myself going anywhere else but there because it is such an awesome campus. Alderson-Broaddus was just closer to home and I ended up making really good friends with the other teammates.

Barbara – the daughter of John and Shawna Stevens – wants to major in biology and Spanish with plans to attend medical school.