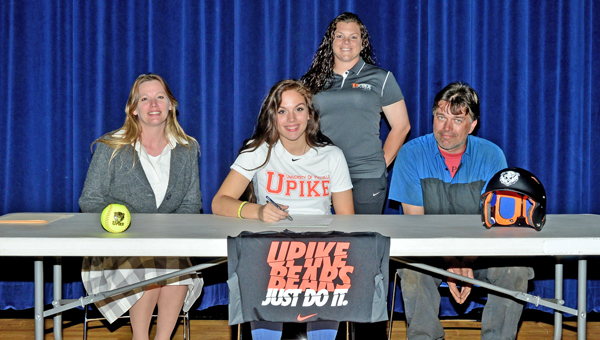 SOUTH POINT — Before Sylvia Griffith could really get loose on the field, she was afraid her chances of playing softball at the University of Pikeville were finished.

The South Point Lady Pointers’ senior first baseman was attending a fall camp at UPike when she rolled her ankle 30 minutes into the workout.

“I thought I was never going to get to go here. I was so embarrassed. It was just so horrible,” said Griffith.

“And then (UPike coach Christine Sheridan) asked me to her winter hitting clinic and I think I did really well and impressed her there. So I was really fortunate that she gave me another chance.”

That second chance was all Sheridan needed to realize she wanted the first baseman and they made it official on Wednesday as Griffith signed a letter-of-intent with the Bears.

Sheridan said Griffith made enough of an impression on her during the brief workout that merited a return visit.

“I felt so bad. She left and came back for a hitting camp in the winter and I got to see her hit. I knew she was athletic even from the 30 minutes she was there the first camp,” said the first-year UPike coach.

“All I got to do was see her field and throw. After I got to see her hit and saw the power she could provide I was excited to get to talk to her about being serious about coming to UPike and being a Bear.

Griffith narrowed her choices to Pikeville and Rio Grande before deciding on the Bears.

“I always wanted to go (to Pikeville). My cousin went there, so it’s really just a dream come true to go there and play there and follow in her footsteps,” said Griffith.

“Their program is on the rise and with coach Sheridan in charge, I believe we will have a really successful season. I’m really excited to learn everything she has to teach me.”

Sheridan said finding a power hitter was one of her priorities and that Griffith has a chance to play right away.

“We have a couple of girls on the team who hit lefty but the other two are slappers (contact hitters) so it would be good to add extra power from the other side of the plate.”

Griffith has played softball since she was 4-years-old.

“Softball is my life,” said Griffith. “I just want to do my best. I want to be a standout athlete and prove to everybody that I deserve this and show everyone who believed in me and fulfill my expectations as a player.”

Griffith – the daughter of Jennifer Griffith and Donald Griffith – is undecided on a major.