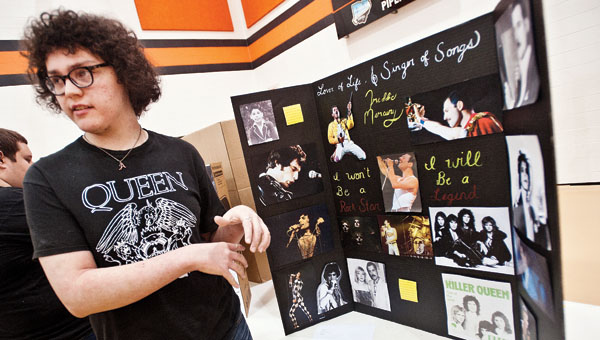 From why the Egyptians made mummies to the biography of Al Capone and just about everything in between, Ironton High School social studies students showed a wide range of projects at this year’s Social Studies Expo.

Students from freshmen to seniors got to pick a project to research in one of five categories; comprehensive social studies, biographies, world conflict, contemporary culture and issues in society. There were a total of 75 projects.

“Out of the classroom, the students took a topic that they were interested in and researched it,” IHS social studies teacher Mary Frances Gunderson said. “Here, they present them to judges that they don’t know.”

Freshman Ali White did her project on the Battle of Belleau Wood during World War I.

“The battle started on June 1, 1918, and lasted until June 26, 1918,” White said. “My dad was in the Marines and always talked about this battle because they were always told about it and quizzed on it.”

Juniors Noah Ratliff and Bailie Brownstead chose biographies and researched the lives of Freddie Mercury of Queen and Bill Gates, creator of Microsoft.

“I’m a big musician and like Mercury. I love piano and Mozart and I play the guitar,” Ratliff said. “He’s my favorite musical figure and I love listening to his music and how he can hit certain pitches with his voice. It’s a tragic story that he died so young.”

Brownstead said Gates interested her because he is one of the richest people in the world.

In the comprehensive social studies category, Cory Rawlins took first place with his project, “What if the MLK March on D.C. never happened.”

Taking first place in the biography category was Hannah Tussey with her research on the life of Dick Van Dyke. Charley Dalton took second with the biography of H.H. Holmes while Ratliff’s work on Freddie Mercury earned him third.

Winning the contemporary culture category was Peyton Arden with his work on Jon Benet Ramsey. Jake Isaac took second with his project about moon landing conspiracies and Hannah Cline won third with her project on J.F.K. assassination theories.

In the issues in society category, Donnie Stapleton won first place with his project on the effect of video games on today’s youth. Autumn Phillips took second with her research on First Lady Michelle Obama’s lunch program while Logan Gleichauf claimed third with his project on fantasy literature and myth in games.

The Great River Raffle may end up in the drink if organizers can’t get enough tickets sold. Not raising $200,000... read more