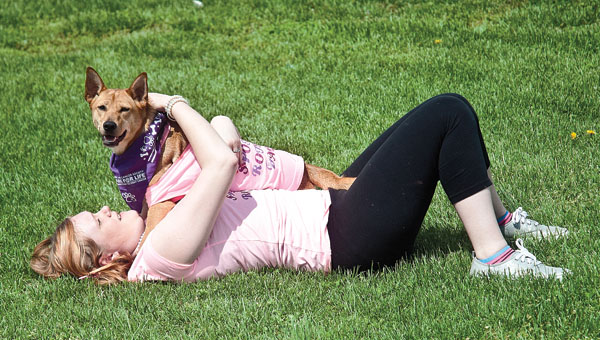 Kassi Roble and her Chihuahua shepherd mix, named Abbie, share a moment together during the Bark for Life event at the Lawrence County Fairgrounds on Saturday.

ROME TOWNSHIP — Wendy Whitted of Proctorville showed up at Bark For Life at the county fairgrounds on Saturday with one of her best buddies, her Australian shepherd, Sky, dressed to the nines in a two-tone gown.

The reason the pair stopped by was simple.

“I am a cancer survivor,” she said. “I’ve had breast cancer and then brain cancer this year.”

Whitted was there with the team she and family and friends have put together for this year’s Relay for Life fundraiser for research for the American Cancer Society. Their slogan was emblazoned on their team T-shirts: “Kicking Cancer to Infinity and Beyond.”

“I try not to think about it,” she said about her illness. “I have good days and bad days. I try to live every day to the fullest.”

On Whitted’s team, selling treats for dogs and raffle tickets for a handmade quilt was Danielle Wellman, of Proctorville, also a cancer survivor, first stricken when she was 2 years old. Wellman would undergo two more bouts with the disease — in 2011 and 2013.

“I was very scared,” she said when diagnosed a second time. “ I never thought I would have cancer again. It shocked me and went into a tailspin.”

That is why she volunteers for the relay, which this year will be May 16 starting at noon at South Point High School.

“It is amazing,” Wellman said. “For 18 hours we don’t sleep because cancer never sleeps and we honor it that way. We get together and share stories and hope for each other.”

The Bark for Life event was a way to celebrate the role dogs play in the lives of cancer patients and how their presence can have a positive effect.

“Today is for the dog, our fur babies,” said LaChona Ferguson, a relay organizer, who came with her puppy, Bella.

Hoping to win the pet and owner look-a-like contest was Kassi Roble of Barboursville, West Virginia, who showed up with Abbie. Both dog and owner were dressed in look-a-like hand-designed pink shirts. Roble had come to show her support, having lost her grandfather to cancer five years ago.

Also at the event were staff members from Brown Veterinarian Services in Wayne, West Virginia, offering microchipping with a portion of the fee going to the cause.

Joining Bark for Life was also a two-year-old rescue organization, Pitiful Paws Rescue, that brought a number of dogs and cats for adoption including a hound named Willie Nelson who had been badly burned when he was chained to a garage that had caught on fire.

“He had the burns for more than a month before someone called us about him,” Anna Mills of the organization, said.

The dog is now fully healed and ready for adoption.

The rescue has 50 animals in foster homes and serves animals in Cabell County, West Virginia, and Lawrence County. The organization can be contacted by 304-948-6291 or at pitifulpawsrescue@hotmail.com.

High school seniors from throughout the Tri-State thinking about attending Ohio University Southern got the opportunity to tour the campus... read more