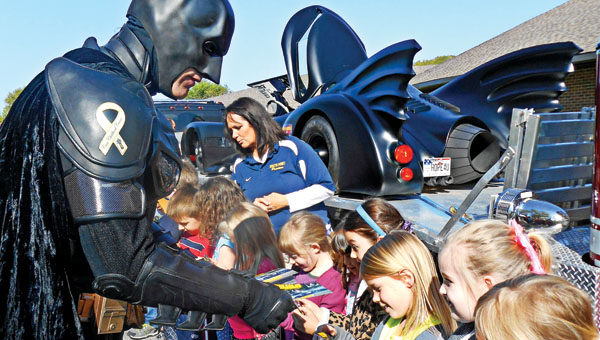 Batman, also known as John Buckland, meets with students at Burlington Elementary School on Monday to give out smoke detectors.

That was the motivation behind Batman, aka John Buckland with the Huntington-based Heroes4Higher, coming to Burlington Elementary School on Monday.

In February a trailer fire claimed the lives of Ashley Mays and three of her children at the Gary Malone Mobile Home Park. Another son, Hunter Parker, was not at home at the time. As Hunter is a student at Burlington, that prompted a campaign to make sure every student’s home is equipped with a smoke detector.

The school determined that 50 families did not have the detectors. Buckland teamed up with Lowe’s to purchase them.

“You worked together and made the school and home safe,” Batman said to the students over the intercom before meeting each class individually. “You will make the families safe. That is what it means to be a hero. We will show the world what an awesome school you are.”

Batman came to the school on Monday to give out those detectors, bringing with him his hand-made Hope Mobile.

“This is going to turn pain into power,” Buckland said about the event.

Springtime is the theme for this May’s tea and fashion show at the Lawrence County Museum. The four-course menu will... read more