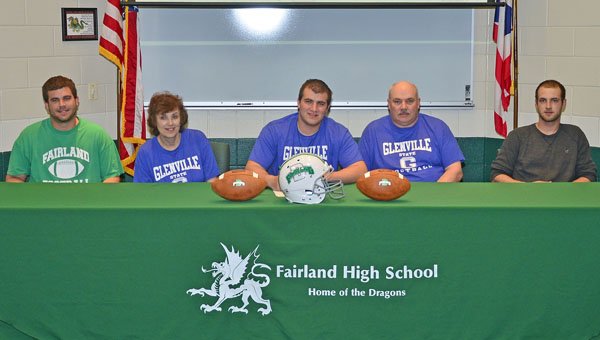 PROCTORVILLE — There’s something to be said for the player-coach relationship.

Tyler Campbell was a lineman for the Fairland Dragons last season. After signing a letter-of-intent on Tuesday, he is now a lineman at Glenville State.

Campbell had offers from Urbana, Heidelberg and Bethany College but opted for Glenville State due mainly to the fact Jackson was now on the staff.

“Having coach “Jack” up there won me over. Having a coach who already coached you up there just makes me want to go up there more,” said Campbell.

Jackson told Campbell that he’ll fill a role at Glenville much like he did with the Dragons.

“Coach Jack said I’ll be a guard, tackle or center. Just be ready to learn them all,” said Campbell. “I prefer offense more to defense. It’s about the same (offensive system). They run the fast tempo just like we did. I should fit in good.”

The 6-foot-3, 285-pound Campbell was hoping to play at the next level, but a knee injury last summer left a cloud over his final season.

“When I hurt my knee I thought my senior year was done with and I wasn’t going to get to play. I thank God every day for giving me the opportunity to play me senior year,” said Campbell.

Campbell will undergo knee surgery on Wednesday and is not expected to play this season.

“It’s going to be tough. I feel if I stay on top of everything and stay working I’ll be fine,” said Campbell.

“They have six linemen that are seniors right now, so that’s actually be good to sit out a year.”

Campbell said the knee didn’t give him any problems during football or basketball. He doesn’t foresee any problems after the surgery.

Glenville State plays in the same league as Urbana. Campbell’s classmates and teammates Chance Short and Dylan Murphy are both headed for Urbana. He admits it will be strange going against his friends.

“It’ll be bitter sweet. We played our whole lives together. Now I get a chance to play against them.

The son of Connie and Tim Campbell, Tyler plans to major in business. He said his father has been his biggest influence.

“My dad has been at every game. He’d be nagging in my ear before the game. I said, ‘I already heard it.’ He said the same thing,” said Campbell.

CINCINNATI (AP) — Johnny Cueto had another great time against the team that can barely touch him. The right-hander gave... read more