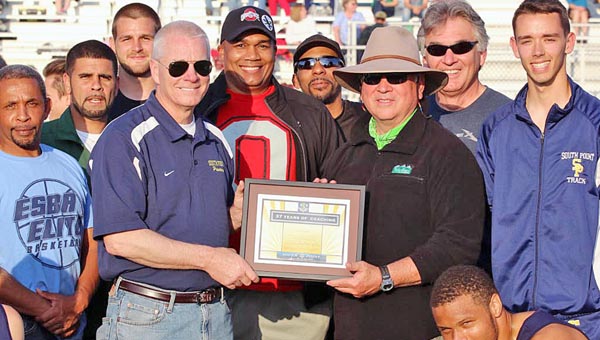 South Point High School’s annual invitational track meet took time to honor former Pointers’ head track coach Randy Smith with a plaque for his 37 years of service. Smith is surrounded by many of his former players as he accepts the plaque presented to him by South Point superintendent Mark Christian. (Courtesy of Tim Gearhart of Tim’s News & Novelties of Ironton)

SOUTH POINT — If Randy Smith’s coaching career was a track event, it would be the 3200 meter run. It’s the longest and toughest but also the most rewarding.

South Point honored Smith with a plaque on Friday at the Pointers’ annual invitational track meet for 37 years of service and success.

He won 14 Ohio Valley Conference championships, 10 district titles, the 1991 regional crown, and the 1989 team was regional runners-up but also state runners-up, the highest finish by any boys’ team from Southern Ohio.

The Pointers also had two other teams that finished among the top 10 in the state meet.

He is the only coach in the country to have two athletes — Kathy Massie and Dean Fulks — win national finalists in what is now called the Wendy’s High School Heisman.

“I would like to thank the girls and junior high track coaches, my assistant coaches over the years, my brother Eric “Scoot” Smith, Carmie McGuffin, Pat McNeely, Akil Brown, Lynn Schrickel and especially my brother Rusty smith who worked with me for over 30 years,” said Smith.

He also thanked his friends, teachers, administrators, board members and other workers who “have gone out of their way to help me over the years.”

And he had one final and special thank-you for his family.

“A special thank you to my wife and children who have supported me and allowed me to work at what I loved,” said Smith.

While at South Point, Smith organized meets, distance races, clinics and seminars while bringing in Olympic athletes to speak and share techniques.

He organized the Arthur Lydiard Classic in honor of the great New Zealand running coach that brought some great athletes to the meet such as Bob Schul, Nick Willis, Barry Mageen and Bill Baillie. The meet has been mentioned in two books including the recent “Peter Snell and the Kiwis Who Flew” by Vern Walker of New Zealand.

After retiring at South Point, Smith is now teaching at Green where he continues to coach cross country and track.