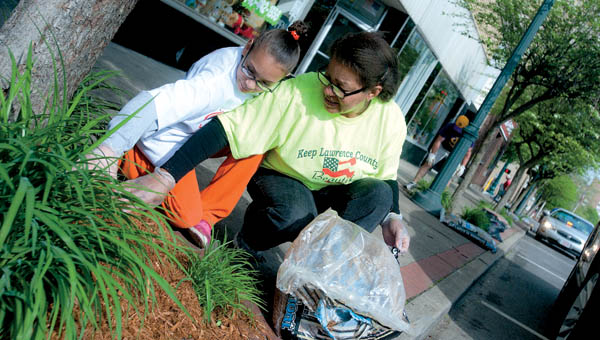 Ayanni Estes, left, and Carol Seward, right, represent the Ohio Association of Youth Clubs as they volunteer Saturday morning in downtown Ironton during the Great American Clean Up.

Purple was the color Saturday for Ironton as the downtown streets were awash with it from the T-shirts worn by St. Joseph School students participating in the annual May Great American Cleanup day.

Streets from Second to Fourth and from Center to Adams were the balliwick of the students, their teachers and parents who came out to weed flower beds and sweep streets.

“They could be doing anything else but weeding around a tree,” Rowena Mollett, a St. Joe Spanish teacher, said. “This is great.”

This was the second year for Isabella Griffiths to join in the event.

“I woke up at 7:30 and my thought was if I’m not doing anything today, why not volunteer,” she said.

The countywide cleanup, under the auspices of the Lawrence-Scioto Solid Waste District, has been going on for almost a decade. This year St. Joe’s faction dominated the effort.

Christi Heighton, a St. Joe parent, came out for her first time to volunteer.

“It is good for the community and for them to do this project,” she said.

Joining in as well were the community service workers of Ironton Municipal Judge O. Clark Collins Jr. and volunteers from the Ohio Association of Youth Clubs.

That organization has participated in the effort for the past seven years, said adult adviser Carol Seward. Joining her were Ayanni Estes, De’Angelo Weekly and Braxton Pringle.

“I love seeing the city beautiful,” Seward said. “When you drive down afterwards and see it, it is amazing.”

Contestants for the 2015 Memorial Day Pageant lined up before the start of the event Saturday at Ohio University Southern.... read more