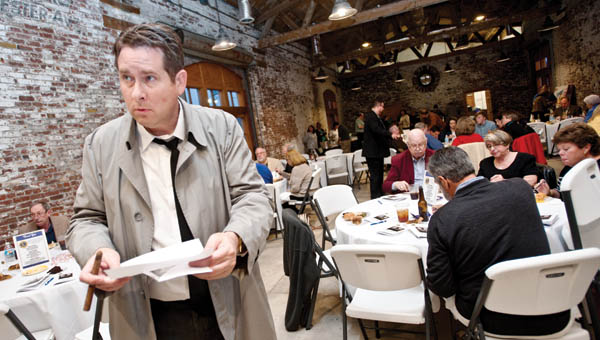 “Hi ya, folks. I’m Lt. Columbus. How are you doing? ” said Columbus, aka George Snider III.

His son said he was out of touch. But Milton Kramer, despite his old-school ways, made a bundle in the telecom business. But one Friday in March, he ended up stabbed to death in the men’s washroom. Blood everywhere.

That’s when Detective Columbus comes in. Literally. In the middle of a dinner party for the Ashland Lions Club, setting the scene for a unique entertainment that has become the rage in the Tri-State.

“Hi ya, folks. I’m Lt. Columbus. How are you doing? ” said Columbus, aka George Snider III.

That night Snider was doing one of the things he loves best — creating a mystery. And not just any kind of mystery. But an interactive one where the audience can join in the fun and the drama and maybe win a prize.

This time the mystery was played out in the historic brick building that now houses the Ashland Transportation Center on the banks of the Ohio River with park lights glowing in the dusk as part of a special evening with the Lions Club. But Murder and Merriment, the group that Snider founded, can be anywhere in the Tri-State almost every weekend in the month.

Murder and Merriment is one of the largest theater groups in West Virginia with a company of 116 members strong.

“Back in the early 1990s, there was a group of friends of mine who used to get together to do a murder mystery game,” Snider said. “We would take turns hosting at a friend’s home and have a blast. It was such a fun party.”

Then a few years later the City of Huntington Foundation was looking for an idea for a fundraiser and Snider stepped up to help.

“I thought I could write one of these things myself,” he said.

Enter Snider, financial planner by day, mystery writer whenever he can. And with a whole lot of help from his talented friends, he became the creator of a new form of fun for the Tri-State.

“We performed it and raised some good money for the foundation,” Snider said.

Next stop was Heritage Station, where the shop owners association thought one of Snider’s mysteries would bring more people downtown.

“Murder and Merriment then was officially born,” he said. “We became an actual group and started performing at the Heritage Station on a quarterly basis. The response was so overwhelming. We sold out every show and opened up to other venues.”

Each mystery unfolds in front of the audience, some with period piece costumes; others in modern-day dress.

“I’ve have always been a huge fan of the old crime TV shows, whether it was Mannix, Barnaby Jones, Quincy or Columbo,” he said.

This night the play revolved around Kramer’s telecommunications company that had invented a device that can steal data from cell phones. At its stockholders’ meeting blueprints are stolen out of a safe and two executives say goodbye permanently.

Now it was up to the audience in Ashland, who did it? Not only is the audience in the dark, but the actors aren’t sure until the last minute if they’re the guilty one or the one who dies.

“The nights of our parties, the actors won’t know until about 10 minutes before they start who is going to bite the bullet,” Snider said. “That is what makes the whole thing fun.”

Usually the mystery is played out while the guests are dining.

“The last hour the guests are still trying to figure it out,” he said.

How involved the guests are with the mystery depends on them.

“They can follow the suspects around, ask questions and examine clues,” Snider said.

Or they can sit quietly and watch it all unfold.

“You can sit back and watch and be shy and quiet or be in the thick of things,” he said.

When the guests think they have the answer, they fill out a ballot on who did it. No motive or reason why.

Guests that night were in the thick of things jumping up to interrogate Pamela Werthmore, CFO for Kramer, or Milton’s son, Martin, or Bernie Schulman, Kramer’s chief marketing director. And then of course, there was Howard Facemeier, in his green bowtie, duct taped glasses and red striped suspenders, fussing and fussing about how he invented Google first. Only he called his Gaggle. Did he do it?

As guests were finishing their coffee and dessert filling out ballots with their guess, Columbus stepped forward with cuffs in hand to pop them on …..

You really didn’t think we were going to tell, did you?

Since Haskins House’s opening, the shop has quickly become a haven, not just for members of the Haskins family, but... read more