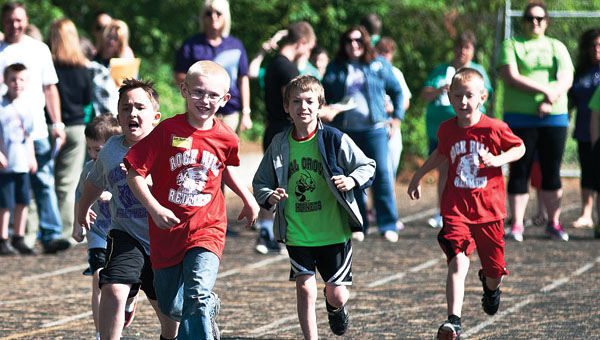 Students from Chesapeake, Dawson-Bryant and Rock Hill compete in the 50 meter dash during the start of 2015 Special Lawrence County Olympics on Wednesday.

COAL GROVE — Running, throwing and jumping were just some of the activities that the athletes took part in at this year’s Lawrence County Special Olympics on Wednesday at Dawson-Bryant High School.

Outdoor events included male and female 50, 100 and 400-meter dashes, long jump and softball throw based on the ages of the athletes.

Some of the multi handicapped events in the gymnasium included a 15-meter wheelchair/walker, a 15-meter tricycle ride, hula hoop, a ball roll for distance, a 15-meter scooter board and more.

“It’s a great day for the kids with special needs. They get to participate in real track and field events just like their school peers,” Fisher said. “It also gives them a chance to get out and represent their schools.”

Cody Stickler and Noah Phillips, both 17, from Rock Hill High School, said they enjoy running and participating in the 400-meter dash event of the Special Olympics.

“The 400-meter dash is my favorite event,” Stickler said. “It’s just the thrill of doing it.”

This is Stickler’s second year participating in the Lawrence County Special Olympics, while Phillips said he has been competing in them since he was eight.

“We couldn’t do any of this without the sponsors, volunteers and donations,” Fisher said. “This would not be possible without them.”

Volunteers from schools and the community helped out with the event and all of the food and drinks that were given to the athletes were donated.

“It’s a day for them to enjoy and be able to participate in athletic events,” Kyra Blankenship, intervention specialist at Dawson-Bryant Middle School, LCSO board member and co-organizer of the event, said. “Everyone has fun, they look forward to it and they take it very serious.”

If you’ve been holding on to mounds of old documents or bulky out-of-date electronics, Saturday is the only day you... read more