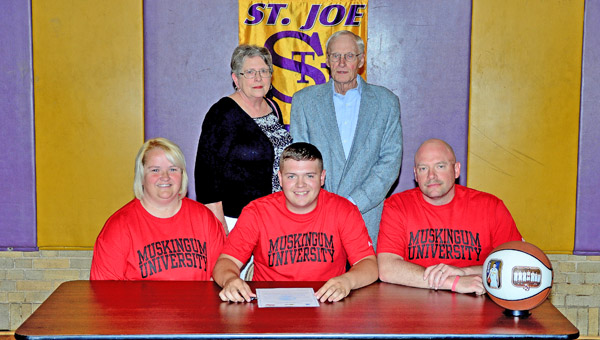 As a deadly 3-point shooter, Zack Kelly knows teams are going to guard him. In fact, there’s a chance he could be face-to-face with the U.S. Coast Guard.

Okay, so that’s an exaggeration but the St. Joseph Flyers’ 6-foot senior guard plans to join the Coast Guard eventually following what he hopes will be a successful stint with Muskingum University.

Although he failed in his bid to join the U.S. Coast Guard Academy, Kelly altered his route by signing with the NCAA Division III Muskingum Fighting Muskies, members of the Ohio Athletic Conference.

Kelly wants to major in criminal justice and he said that degree will help him when he joins the Coast Guard.

“I plan on enlisting in the Coast Guard after college anyway. The Academy would have been a better situation, but since I didn’t get accepted, Muskingum was the better place,” said Kelly who also talked with Ohio Christian and Ohio Dominican.

Don’t get Kelly wrong. He didn’t feel like he had to settle for Muskingum. In fact, he was drawn to the school and its program.

Kelly’s path to Muskingum has been different as well. He began his career at Raceland, Ky., but transferred to St. Joseph this past season. He was forced to sit out 11 games due to Ohio transfer rules.

“I played with AAU with Troy Scott and Wulf Goheen and traveled with them pretty much since eighth grade. And then it felt right to come here. I felt like being at St. Joe was the best opportunity for me,” said Kelly.

“And it turned out it was.”

Kelly averaged almost 10 points a game in his abbreviated season. In nine games, he made 23 3-point goals.

A 3-point shooter is what the Fighting Muskies need. They attempted an average of 17.6 3-point goals a game and made just 5.6 a contest.

Kelly’s first shot for the Flyers was a 3-point attempt against New Boston and it found nothing but the bottom of the net.

“After you hit a couple, teams start coming at you. But after I hit that first 3, that was a pretty cool feeling, especially with the crowd. It was definitely memorable,” said Kelly with a grin.

Even though the Muskies need a long-range shooter, Kelly knows nothing will be handed to him and playing at the college level will take a lot of adjustments.

“It’s going to be a transition just like junior high to high school and high school to college. It may take me a year or two, but I plan on going up there and being a significant part of the program and helping the school,” said Kelly.

Muskingum was 6-19 last season and had just one senior under veteran coach Gene Ford who retired.

The program looks to move forward under new head coach Travis Schwab who was 142-80 at Wittenberg with a North Coast Athletic Conference league title and three conference tournament championships.

“I’m not really sure what the prospects are. I know they are young,” said Kelly.

Zack is the son of Chad and Tracy Kelly of Coal Grove.

Jim Walker jim.walker@irontontribune.com   PEDRO — If pitching and defense are the bloodline of winning, the Red Cross must have... read more