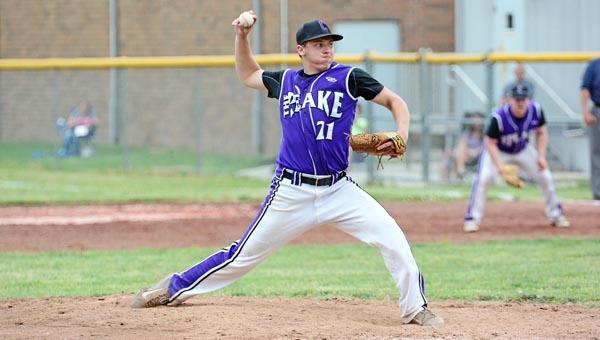 CHESAPEAKE — This wasn’t going to win an Academy Award, but it almost matched “Gone With The Wind” for length and drama.

In a game that featured a little of everything, the Chesapeake Panthers outlasted the South Point Pointers 3-2 in 13 innings on Sunday to win the Division III sectional title.

“It was a grind all day. I was so proud of my kinds battled all day and found a way to win. That’s the thing about this team. They don’t seem to quit,” said Panthers’ coach Justin Davis.

Lester struck out 10, walked three, gave up four hits and two runs. Henson fanned four, walked one and gave up one hit.

The Panthers (16-6) will now play Westfall at 7:30 p.m. Tuesday at Chillicothe Veterans’ Stadium in the district semifinals.

In the 13th inning, Nate Smith missed a third strike that was in the dirt and a throwing error allowed him to reach first base.

Lester singled to put runners on the corners and Dakota Blankenship was walked intentionally to load the bases. But Henson thwarted the strategy as he lined a single up the middle to drive in the winning run.

“Henson hit a ball hard in his previous at-bat. He got a fastball and he got it a little sharper and just drilled it,” said Davis.

Both teams scored twice in the fifth inning with two outs.

The Pointers’ Chris Woodard singled and Trey Kearns tripled him home. Wade reached on an error as the second run scored.

In the bottom of the inning, Kolton Webb drew a walk, stole second and scored on Casey McComas’ base hit. McComas went to second on the throw home and scored on a hit by Smith.

Both teams turned in some big defensive plays.

Panthers’ catcher Blake Ashworth threw out two runners in 10th inning after a walk to Tanner Hall and a hit by Woodard.

“It was a long, hot day, and Blake did a great job for us. I can’t say enough about our defense,” said Davis.

“South Point played a great game. They’re a team talented enough to beat you in a game like this. Whitt pitched an unbelievable game. He beat us twice last year. We’ve struggled with him in the past.”

South Point got a big defensive play in the 11th inning with Lester on second base and two outs. Ashworth hit a flair into right field but Whitt — now playing first base — made an outstanding over-the-shoulder catch.

No outs when winning run scored.

Price hints at changes after Reds’ 9-8 loss to Giants