Battle to beat cancer keeps on 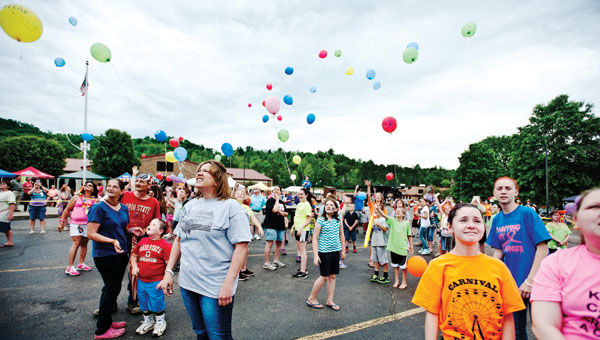 Symmes Valley students, faculty members as well as their friends and family gathered for a annual balloon launch during the school’s Relay for Life event on Friday.

SOUTH POINT — Danielle Wellman was cheered by family and friends as she joined the others in the survivor’s lap at this year’s Relay for Life at South Point High School on Saturday.

Wellman is a survivor of three different kinds of cancer, including one that struck in childhood. She was at the relay with her teammates, who called themselves, “Kicking Cancer to Infinity and Beyond,” from Proctorville.

Kara Rudman was there for her father Jack, who died in July of 2014 from cancer.

“I’m here to promote cancer research and honor my dad,” she said as she waited for the relay to begin with her friends with Team Jack.

The relay began with entertainment committee chair Becky McClelland welcoming everyone to the South Point track followed by a performance from the River Magic Chorus.

The goal of the Lawrence County’s relay was $52,000 as teams worked throughout the year to reach it.

Despite the drizzling rain that soaked many, the relay was set to run from noon to midnight.

“Today, regardless of the weather, it is a great day to beat cancer,” McClelland said.