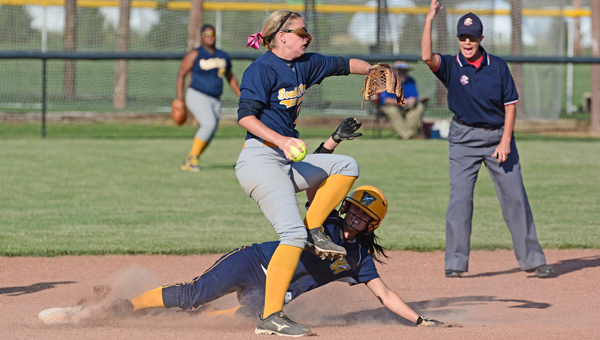 South Point Lady Pointers’ shortstop Haley Rawlins avoids the sliding runner after getting a force out at second base. The Lady Pointers beat Wellston 8-3 on Tuesday in the Division III district semifinals. (Kent Sanborn of Southern Ohio Sports Photos)

The Lady Pointers grounded the Wellston Lady Golden Rockets with an 8-3 win in the Division III district semifinals on Tuesday.

The Lady Pointers (12-7) will play Westfall in the district finals at 3 p.m. on Saturday. Westfall beat Minford 6-2 in the other semifinal game.

“The girls are starting to believe in themselves. It’s amazing what a little self-confidence will do for a team,” said South Point coach Tanner Heaberlin.

“We hand another great pitching performance from Abby Hannah, we played solid defense again and our upper classmen — Abbey Winkler, Haley Rawlins and Halie Powell — all came through with big hits tonight.”

Abby Hannah got the win with a six-hitter. She struck out four, walked one and all three runs were earned.

Katelyn Stewart took the loss for Wellston. She fanned seven but walked five and six runs were earned.

The Lady Pointers broke a scoreless tie with two runs in the third inning.

Winkler had a leadoff single and Rawlins tripled her home. A dropped third strike and throw to first base enabled Rawlins to score.

Wellston cut the deficit to 2-1 in the top of the fourth when Brittany Johnston doubled, moved to third on a sacrifice and Amber Kisor hit a sacrifice fly.

South Point blew the game open with four runs in the fifth.

Rawlins walked and Halie Powell had a two-run single. Emilee Powell capped the rally with an RBI single.

The Lady Pointers increased the lead to 8-1 in the sixth.

Leah Lawson walked to lead off the inning and Hannah doubled. Lawson scored on a wild pitch and Hannah came home on an error.

Wellston (12-1) added two runs in the seventh on a two-run triple by Leianna Hanes after singles by Kisor and Brook Carpenter.

Winkler was 2-4 with a double and a run batted in as the Lady Pointers had seven hits.

Jim Walker jim.walker@irontontribune.com   CHILLICOTHE — Things are happening fast for the Chesapeake Panthers. After a 13-inning win in the... read more