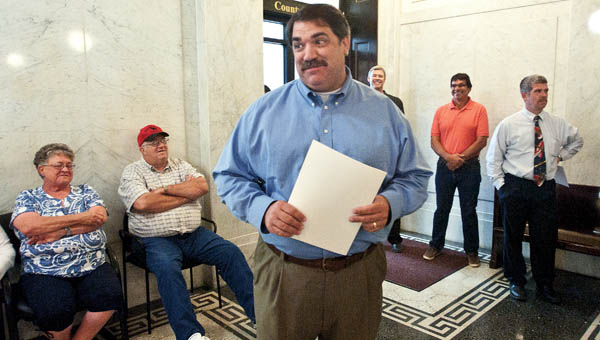 The farewell party for Lawrence County Engineer Doug Cade was filled with stories, reminiscences and laughter.

Cade will officially leave the county on June 5 to take the post of deputy engineer for Hancock County. His successor will be Patrick Leighty of E.L. Robinson Engineering.

Hosting the event was Ray Dutey, former county auditor and chair of the county Republican party.

“We are sure going to miss him,” Dutey said. “He has been a good engineer for Lawrence County. Not just getting grants for the county, but taking care of the bridges and slips.”

Cade, who became the county engineer in 2011, praised his coworkers for their work during his tenure.

“I’ve got a great team,” he said to guests at the courthouse event.

Cade also received a certificate from Gov. John Kasich for his “remarkable and lasting impact on your community.”

The certificate was presented to Cade by Marilyn Ashcraft, of the governor’s office.

Hancock’s county seat is Findlay, the headquarters of Marathon Oil. Cade’s wife is an employee of Marathon Petroleum.

University of Nebraska assistant soccer coach Peter Underwood died the morning of May 16 when he was involved in a... read more