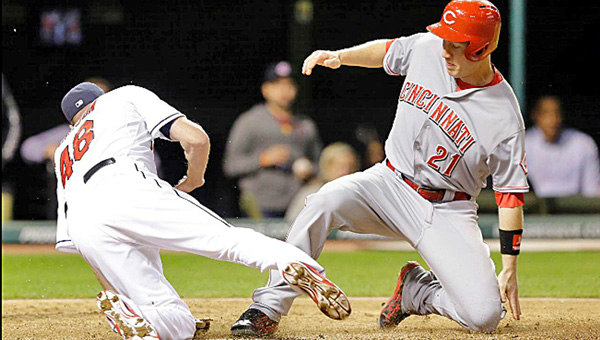 Cincinnati Reds’ Todd Frazier scores on a wild pitch during the ninth inning of Friday’s game. Frazier’s run wasn’t enough as the Reds lost their sixth straight game in a 7-3 loss to the Cleveland Indians. (Courtesy of The Cincinnati Reds.com)

The Reds have been outscored 47-16 during their skid, which began May 15 against San Francisco. The interleague loss also dropped Cincinnati to a season-worst five games below .500.

“I’ve been given the task of putting the puzzle pieces together, and I’m not doing a very good job,” said Reds manager Bryan Price, whose club is 18-23. “Not only are we losing, there is a whole lot of distance between the teams we’re losing to.

“This will end and things will get better for us, but it’s the worst feeling right now.”

Third baseman Todd Frazier had two hits and an RBI for Cincinnati, while center fielder Billy Hamilton drove in a run with a groundout in the second inning. The latter put the Reds ahead 1-0, which was their first lead since their last victory, eight days earlier against the Giants.

Moss put Cleveland in front for good at 3-2 with a solo homer in the third, then doubled home two in the fourth off Leake (2-3). The right-hander walked five and surrendered seven hits in his shortest start of the year.

“I came off the mound laughing at one point because I couldn’t throw the ball where I wanted to,” Leake said. “I’m just not executing pitches right now. We’ll figure this out, but it’s unfortunate that it’s happening for all of us at the same time.”

Leake allowed a career-high nine runs over five innings in his previous start against San Francisco. He is 0-2 with a 9.00 ERA in his last three outings, giving his manager another reason to be frustrated.

“Mike has just got to be better,” Price said. “He was around the zone and wasn’t able to make the right pitches at the right time. He wasn’t real sharp and he never got rolling. You don’t see many outings like this from him, that I can tell you.”

Right-hander Carlos Carrasco (5-4) struck out seven over six innings for the Indians, who won for the sixth time in eight games. Cleveland leads the all-time series 46-44.

The Reds went 1 for 6 with runners in scoring position. Frazier’s double in the third was their lone hit.

Reds RHP Jason Marquis is in line to start Monday against Colorado, but Price said he “will hold off on addressing that.” Marquis is 3-4 with a team-high 6.91 ERA in eight starts, putting him in jeopardy of being bumped from the rotation by rookie RHP Raisel Iglesias. “There are a lot of things to consider when you’re dealing with a veteran player like Jason,” Price said.

Cincinnati C Devin Mesoraco (left hip impingement) was not in the lineup for matchup reasons. The National League All-Star, who hasn’t been behind the plate since April 12, remains limited to pinch-hitting and playing DH. “Devin is getting treatment, making progress toward catching,” Price said. “But it’s nice having him as an option to DH or pinch-hit in these games.”

Indians: OF Michael Brantley (back soreness) served as the DH, going 0 for 4 with a walk. Despite battling the injury since spring training, he is hitting .319.

Reds: RHP Anthony DeSclafani, who was acquired from the Marlins in December, seeks his first win since April 20. The rookie is 0-4 with a 6.38 ERA in five starts since beating Milwaukee.

Indians: RHP Corey Kluber looks for his second victory of the season. The reigning American League Cy Young winner has 30 strikeouts in 17 innings over his last two outings.