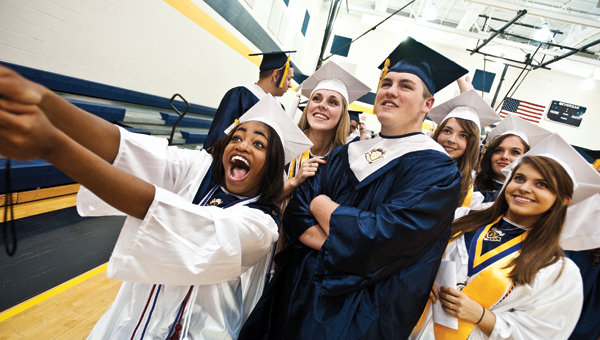 Students from the 2015 South Point High School graduating class take a selfie before the start of commencement exercises on Sunday.

SOUTH POINT — As seniors lined up for their march into the school’s gymnasium on Sunday, each student carried a Blow-Pop sucker to hand to their principal as they crossed the stage.

It was one last gag, one last memory of the South Point High School Class of 2015, which boasted nearly 160 graduates.

“They are the greatest class to go through South Point,” said Ben Coleman III, principal. “They have shown through their whole time here that they are champions of the highest degree.”

Many of the seniors awaiting the processional said they were glad to be graduating and moving on.

Justin Chapman said he was “overly excited,” while Casey Caudill said she was “excited to see what everyone’s future holds.”

Chapman will attend Ohio University in the fall; Caudill said she was taking a year off.

Gage Townson said he couldn’t wait to get started with his next chapter, which is taking him on the other side of the country. He will play football for a college in Huntington Beach, California.

“Being away from home is going to be a lot different, but it’s a good opportunity,” Townson said.

Good opportunities were aplenty for the South Point High School Class of 2015. Coleman said more than $2 million in scholarships was offered to the seniors.

“It’s been a honor and a privilege to be their principal,” he said.

As one last piece of advice, Coleman said, “Always, and no matter what you do, strive to be a champion.”

Graduating students take in the last bits of advice from their peers during commencement on Sunday at Dawson-Bryant High School.... read more