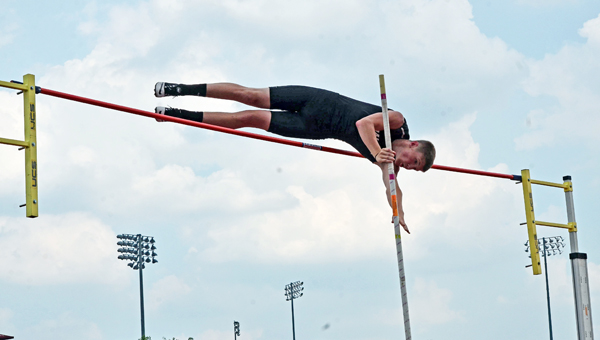 Willis was the district and regional champion the past two seasons and was making his second straight state tournament trip.

“I was just really happy to make it here. It’s always been a goal of mine to make it to the state. I did it last year and I was happy to do it again this year,” said Willis.

“I’m just hoping all the boys out here get their records and their PRs and I hope to see them again next year.”

Logan Konst of Anna went 15-8 to win the event with Adam Alexander of Old Fort second at 15-4.

“Eli is just a sophomore and he’s got a lot of potential still ahead of him,” said Hornets’ coach Jay Lucas. “It’ll be interesting and a lot of fun to see how he performs the next two years.”

Willis attributed a lot of his success to Lucas.

“I would like to thank the man who made me the vaulter I am today, coach Lucas,” said Willis.

“He has worked with me for hours on end and I could never thank him enought. I’ll miss you coach Luke.”

“He hurt his ankle a few days before the district. But that’s not an excuse. He’s had a great year,” said Ironton coach Greg Cronacher.

South Point’s 4×100-meter relay team of Stephen Wagoner, Trent Paterson, Mason White and Keion Dre’ Hill was 11th with a 43.96 time. White is a senior and the other three are juniors.

Parma Padua Franciscan won the event with a 42.53 time.