Burlington project off and running 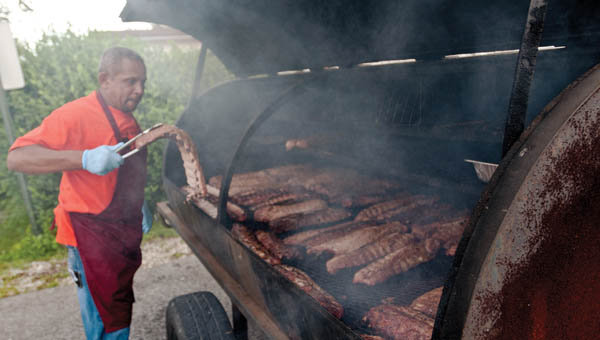 Aaron Jackson is the man of the hour as he barbecues ribs for the Burlington Courthouse Project kickoff Saturday at the Commons Park.

BURLINGTON — The Saturday rains held off long enough for the supporters of the Burlington Courthouse project to feast on smoked ribs, beans and good old-fashioned Appalachian music.

The Burlington Commons park was the site for the official kickoff of the fundraiser to come up with enough money to build a replica of the Burlington Courthouse, the first courthouse in Lawrence County.

Already there is $3,500 in the bank and $10,000 in pledges going toward the quarter-million-dollar project. That is on top of Community Development Block Grants of $107,000, already committed to the project.

The bicentennial committee, chaired by Lawrence County Commissioner Bill Pratt, may also apply for a $10,000 grant from an AEP foundation.

Pratt, who played host at the kickoff, told the crowd, that the structure would be “centrally located for the county. There is a lot of rich history here.”

Once the building is up and dedicated for the bicentennial in 2016, it will become a community center for that end of the county and can be rented out, along with the park, for functions.

Pratt was followed by local historians Bob Leith and Chris Saunders, who talked about the county and the Burlington community. Food was provided by Aaron Jackson and Debbie Rogers. Music was performed by the Tri-State Mountain Dulcimer Society of Huntington, West Virginia.