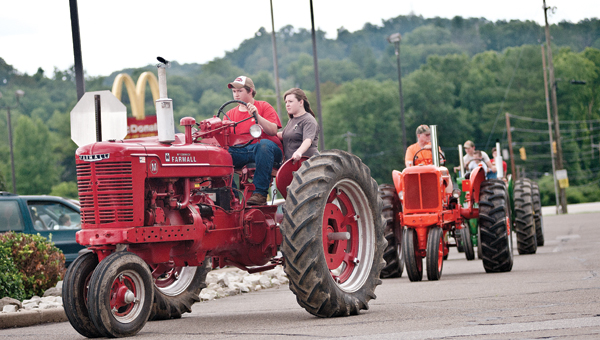 Participants of Ironmasters Days take their tractors for a ride through the parking lot of the Ironton Hills Shopping Plaza for a parade on Saturday.

Those who drove past Ironton Hills Plaza Friday or Saturday may have noticed antique tractors, engines and farm equipment at the 17th annual Ironmasters Days.

“People bring their items and these are things you don’t see everyday,” Don Mootz, one of the event organizers, said. “People that do this and have items in these shows travel all over.”

Richard Collins, of Lavalette, West Virginia, had three antique engines and a tractor at the show.

“Most of the engines at these shows are hit-and-miss engines. They are what people used on farms and in light industry,” Collins said. “I go to these shows all over. It’s something for retired people to do. I’ve been to shows in several states including Michigan and Florida, but I’ve never taken any of my engines more than 50 miles.”

Bill Knupp, of Dresden, and Billy Cooper, of Irvine, Kentucky, also showed off items at the event, including Knupp’s antique steam boiler and small hot air engines that ran through an air compressor, and Cooper’s 1917 engine-generator operated by kerosene that connected to two wooden figures Cooper built to perform chores.

Cooper said he averages about 20 shows over five states a year while Knupp said that he attends shows like this just about every weekend.

The event also included a parade of the tractors in the parking lot, children’s tractor pulls and a pig roast that was served on Saturday. Nearly all of the 18th and 19th century equipment was in its original condition.

“These shows are done worldwide,” Mootz said. “It brings back a lot of memories for old folks and educates the young folks.”