Getting in swing with his new job 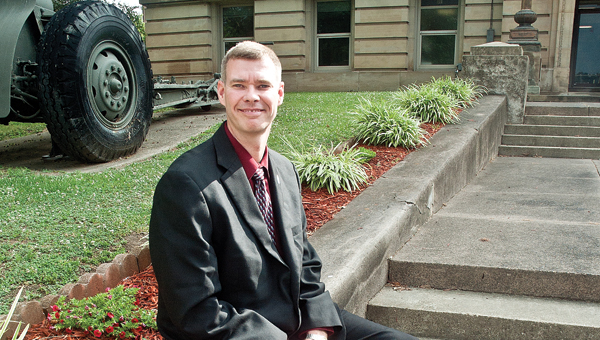 When Patrick Leighty got his new job, all he had to do was walk across the street.

One day he was working in the private sector at E.L. Robinson Engineering on Center Street. The next day he was ensconced on the second floor courthouse office of the Lawrence County Engineer, taking over the reins from Doug Cade.

As the county’s latest engineer, Leighty has been on the job less than a month. But already he’s mastering the drill. Like just what is within his realm now and what is not.

“The county engineer is in charge of 380 miles of county roads and 326 bridges, both county and township,” Leighty said.

The office does that with a budget just over $4 million and a staff of 35.

That is about six times the number of people he worked with when he was at E.L. Robinson. But those years have given him experience that will make his job for the county more rewarding.

In fact, it could be said Leighty has been preparing for his current post most of his life.

“There I saw municipal management, the sewer plant, the roadways, the drainage system,” he said. “I saw all of that when I was a kid. Seeing how my dad interacted with the public.”

Around the time he was in junior high, he decided he wanted to be a civil engineer. It was a choice he was so passionate about that a guidance counselor couldn’t dissuade him even though he was promised a full ride if he would change that ambition to becoming a plastics engineer.

“Then I remember talking in high school about wanting to be a surveyor,” he said.

Both those professions are mandatory for anyone wanting to serve as the engineer in any of Ohio’s 88 counties. The individual must be a professionally licensed civil engineer and surveyor.

Leighty got his engineering degree from the University of Kentucky and his surveying degree from Columbus State. From there he worked exclusively in the private sector until becoming the county engineer.

“It is a little different,” he said about the two realms. “(In the public) you have a budget given to you. In the private sector, the more clients and projects determines your budget and how many people you have working for you. In the public you are working within bounds. What needs to be done. You see if there are efficiencies. You are looking for growth in the private sector.”

In both cases Leighty still sees his role as working for others.

While he is still adjusting to the new job, Leighty already has some long-term goals.

“Improving the safety of the roads, that is a big goal, the health, safety and welfare of the community,” he said. “We want to be able to fix issues that come our way and work toward having problems fixed. And I would like to see that all we have to perform (eventually) is preventive maintenance.”

Just as his client base has increased exponentially so does Leighty see his job satisfaction.

“When you work for the public sector, you get to rejoice in everything,” he said. “ If we go out and put in a new bridge, we get gratification in helping.”

Close to $400,000 in Community Development Block Grants could come into the eastern end of the county for infrastructure updates,... read more