Lakers use No. 2 pick to grab OSU’s Russell 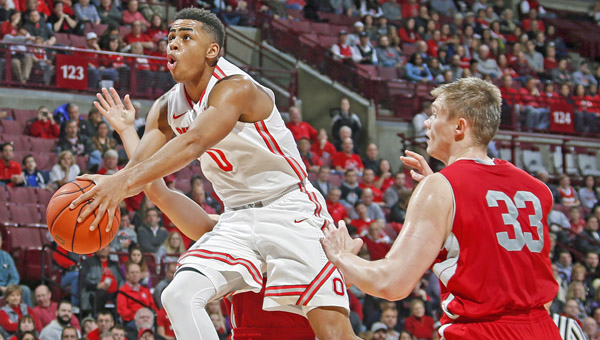 NEW YORK (AP) — The Minnesota Timberwolves got their man in the middle. The Lakers got a playmaking partner for Kobe Bryant.

Knicks fans just got mad — though not for long.

They were cheering later in the first round when the Knicks acquired the rights to Notre Dame guard Jerian Grant from Atlanta for Tim Hardaway Jr.

Before that, the Timberwolves went for a center in their first time owning the No. 1 pick. They can add him to a young roster featuring Rookie of the Year Andrew Wiggins, who was picked first last year by Cleveland and later dealt to Minnesota in the Kevin Love trade.

Towns’ selection wasn’t a surprise — though he said he didn’t know until it was announced.

“When Mr. Adam Silver came out, I saw him, and he said, ‘With the No. 1 pick’, I was racing,” said Towns, who was sitting with Kentucky coach John Calipari.

“I told Coach Cal before when he first came out that I was trying to drink the water and I was shaking uncontrollably, and I told him, ‘Coach, don’t give me the ball right now for the last-second shot. I wouldn’t make it.”’

The Los Angeles Lakers then took guard D’Angelo Russell of Ohio State, who was wearing a scarlet jacket, bowtie and shoes that matched the Buckeyes’ school colors.

Red — or some shade of it — was the color of choice in the green room, though Towns wore a grey jacket and Russell’s table later turned gold when his supporters donned Lakers hats.

He drew huge cheers when he was announced but his crowd was dwarfed by Towns’. The New Jersey native said he had above 50 family and friends in attendance.

“This is home to me,” he said. “Been able to come here and have all my closest friends and love ones come out here. It’s the most special moments in my life.”

The 6-foot-11 Towns averaged 10.3 points and 6.7 rebounds in just 21 minutes per game, as Kentucky used a platoon system in winning its first 38 games and reaching the Final Four.

It was Kentucky’s third No. 1 pick in the last six years, joining Anthony Davis in 2012 and John Wall in 2010. The Wildcats were hoping to have a record seven players picked and were well on their way when Sacramento took center Willie Cauley-Stein with the sixth pick, Utah grabbed Trey Lyles at No. 12 and guard Devin Booker followed one spot later to Phoenix.

Booker, at 18 the youngest player in the draft, gave the Wildcats a record-tying four players among the top 14 selections. Duke in 1999 and North Carolina in 2005 also had four lottery picks.

“Just shows our team was special. Unlike any other,” Lyles said. “Still got three other guys going to go tonight.”

But they had to settle for tying the record with six selections, as Dakari Johnson and Andrew Harrison went in the second round, but Aaron Harrison was not picked.

For weeks, Towns and Duke’s Jahlil Okafor had been considered the top two selections. But the Lakers instead decided on backcourt help with a player who can step right in and play alongside Bryant in what could be the superstar’s final season.

“Kobe’s a great dude,” Russell said. “Not knowing how much he has left in the tank is the scary thing. I’m really looking forward to him taking me under his wing if possible and feed me the most knowledge he can and use that as fire against my opponents.”

Okafor fell to the Philadelphia 76ers at No. 3, becoming the 19th lottery selection and 29th first-round pick — most in NCAA history — under coach Mike Krzyzewski. Those numbers increased when Miami drafted Justise Winslow 10th and Cleveland took Tyus Jones at No. 24 — though his rights were later dealt to Minnesota.

The Knicks ended the run of one-and-dones when they took Porzingis with the No. 4 pick. The 19-year-old forward had been surging up draft boards but Knicks fans, who haven’t forgotten the drafting of Frederic Weis and were underwhelmed by the acquisition of Andrea Bargnani, wanted no part of him, booing lustily after his name was called by Silver.

“Lot of fans weren’t happy they drafted me,” Porzingis said. “I have to do everything in my hands to turn those booing fans into clapping fans. I was happy about it. Want to be part of this organization, the fans are harsh sometimes, that’s how it is in New York and I’m ready for it.”

Another international player followed, as Orlando took Croatian Mario Hezonja at No. 5, and Emmanuel Mudiay, born in Congo, raised in Texas and a professional last season in China, went seventh to Denver. Detroit took Arizona’s Stanley Johnson eighth before national player of the year Frank Kaminsky went to Charlotte at No. 9.

The Lakers later added Wyoming’s Larry Nance Jr. with the No. 27 pick, while Boston used its two first-round selections on Terry Rozier of Louisville (16th) and R.J. Hunter of Georgia State (28th).

The NBA champion Golden State Warriors used the 30th and final pick of the first round on UCLA forward Kevon Looney, who thought he could be a lottery pick and instead lasted so long he left the green room before returning shortly before he was selected.

The final picks included the usual assortment of international players, running the final tally to 14.