Flicker of Hope: Rose excited about possible meeting with Manfred 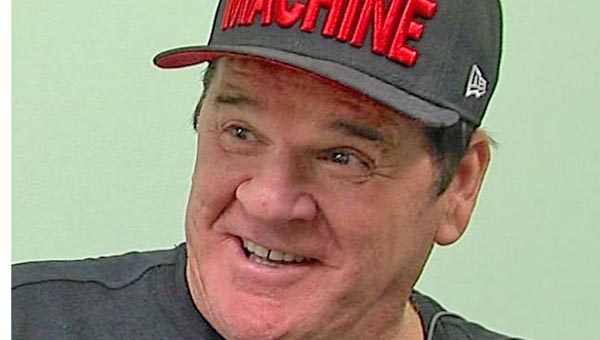 Former Cincinnati Reds’ great Pete Rose is hoping a meeting with new MLB commissioner Rob Manfred will lead to his reinstatement to baseball.

CINCINNATI — There are those who believe that Pete Rose should use a Meghan Trainor song as his theme music.

“I know you lie, cause your lips are moving,” are the lyrics penned by Trainor and Kevin Kadish and could easily be interpreted that Trainor was singing about Rose.

In the wake of the recent report that ESPN produced a notebook paper of some sort showing Rose bet on baseball games in 1986 as a player, many people are beginning to wonder what they can and can not believe when Rose talks about his past gambling on the game.

And in a recent interview with Fox Sports reporter Chris Meyers, Rose wasn’t able to give admission or deny the report.

“And I’m sure those questions will come about when I speak with the commissioner when I meet with him in August, I hope. Then we’ll address those. As of today, speaking to you, I would love to talk to you. I’d love to give you all the information. But I’m going to keep my word and keep my comments to no comment I guess. I know as a reporter you don’t like that comment.”

Rose was banned from baseball in 1989 when allegations and an in-dept report linked him to betting on baseball. This was a violation of baseball’s most important rule in order to uphold the integrity of the game.

Former Sports Illustrated magazine writer Frank DeFord once wrote that “Pete Rose oughtta be in the Hall of Fame. His offenses compared to drug cheats…rise to the level of the parking ticket.”

But baseball is a game steeped in tradition. Rules are rules. Then-commissioner Kenesaw Landis set the standard after the 1919 World Series in which allegedly eight Chicago White Sox players took money from gamblers to throw the series to — ironically — the Cincinnati Reds.

Landis banished the players from the game including Joe Jackson who was found guilty despite his protests. Jackson led all players with a .379 batting average in the series and played a flawless defensive game after deciding not to take the bribe.

Because of the Black Sox Scandal, baseball implemented its rule prohibiting gambling with a penalty of a lifetime ban. There is a sign stating the rule and punishment in every major league locker room.

So with such a love and respect for the game of baseball and warning signs everywhere, how could Rose allow himself to commit the Cardinal sin?

Rose was blunt and honest in his explanation.

“I don’t know. I was stupid. I made mistakes,” said a candid Rose.

Previous commissioner Bud Selig would not touch the Rose situation during his tenure, but new commissioner Rob Manfred has agreed to at least sit down and talk with Rose about a possible reinstatement that would allow baseball’s all-time leader with 4,256 hits to become eligible for the Hall of Fame.

Rose said he was ecstatic that Manfred is going to review his status. He said that “was something I couldn’t get from Mr. (Bud) Selig. For Rob Manfred to do that is heartwarming for me.”

While Rose admits fans are going are going to make up their own minds about the situation and him, he said he will be as honest as he can with the commissioner and that he “respects the office and I respect (Manfred) as an individual. I love the game and I care about the game.”

Rose explained that the original document he signed with then-commissioner Bart Giamatti had an agreement that there would be no finding that Pete Rose bet on baseball or no denial on Pete’s part.

But Giamatti died of a heart attack less than a month after Rose accepted his ban from baseball.

For 14 years Rose denied he bet on baseball. However, he admitted that when the findings were released he initially listened to what his lawyers told him what to do.

Rose said he had a six-year-old son and two-year-old daughter and he was out of a job. Needing work, he took the only job he could find and it was signing autographs and taking photographs with fans.

The problem with the job: it was at a hotel in Las Vegas, the gambling capital of the world.

“They had to eat. This was the 1980s and we weren’t making five, 10 million dollars,” Rose explained.

The John Dowd Report that brought evidence of Rose’s gambling to the commissioner’s office said Rose bet about $2,000 a day but he always wagered that the Reds would win.

When he came back to the Reds in a trade with Montreal in 1984, Rose was named player/manager. Rose took a team that was sitting in last place and guided the Reds to a second place finish from 1985-88. The gambling scandal hit in 1989 and the Reds finished fifth.

However, the team Rose had in place won the 1990 World Series.

Even though Rose bet on baseball, many fans are forgiving because they believe Rose never bet on his team to lose. Part of that was due to his zealous drive to win as a player.

Rose never liked to lose. That’s why he played the game so hard. He made many statements during his career that expressed his desire to win.

“There’s an old saying that money can’t buy happiness. If it could, I’d buy myself four hits every game.”

“Does Pete hustle?” Aaron asked rhetorically. “Before the All-Star Game he came into the clubhouse and took off his shoes and they ran another mile without him.”

Rose said that in the past 25 years he has “cleaned up my act. I’ve learned from my mistakes. I’ve tried to be a good citizen, pay my taxes, go work hard, talk to a lot of kids, parents. I’ve got a lot of fans out there. I’ve got a lot of support from guys like (Joe) Morgan and (Johnny) Bench and (Mike) Schmidt and (Reds’ owner Bob) Mr. Castellini, which is all part of the deal.”

Rose got psychiatric help for his gambling problem and believes it is something that will never haunt him again.

“I never bet out of my means, but when you lose a job and lose credibility like I did, you have to think there is a problem. But that’s water under the bridge.”

Rose is being allowed to take part in some of the festivities surrounding this year’s MLB All-Star Game in Cincinnati. The 74-year-old Rose said he’s excited about going to the all-star game.

Getting reinstated into baseball would allow Rose to be eligible for the Hall of Fame voting, but he has other reasons.

“I think my grandkids would like that,” said Rose who has three grandsons and three granddaughters.

Another thing Rose would like to be able to do is just go into the clubhouse or stand by the batting cage during batting practice. Rose is a baseball junkie and just being around the game is his fix.

“I really messed up a long, long time ago. I’m not the same person today that I was 35 years ago. I keep my nose clean. You never read about me being in any kind of trouble,” said Rose.

Honesty will be the key for Rose whenever he meets with Manfred. He knows that not only are fans and sports writers skeptical of his comments, but he’s sure Manfred will be as well.

“He’s going to ask questions and I’m going to answer him. It’s not that I have to answer, I want to. I hope he goes back the past 25 years and not just 35 years ago. I’m a pretty clean-cut guy,” said Rose.

The meeting may happen in August, and Rose hopes that it happens then but for a different reason than others might think.

“I don’t want to meet in September. That’s too close to the World Series and playoffs,” said Rose, not wanting to take the spotlight from the game.

“My phone is always on. If I get the call, I’ll be on the next plane. I’ll admit to everything.”

Maybe this time when his lips are moving, Rose can re-write Meghan Trainor’s lyrics with a positive result.