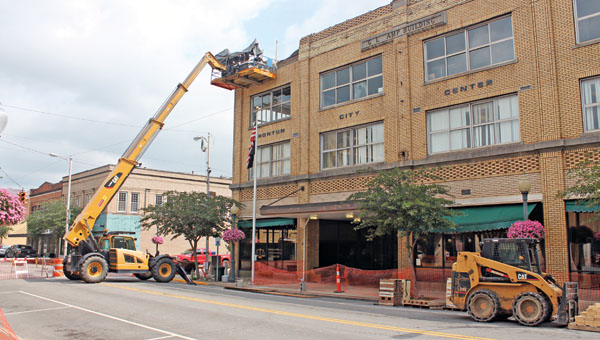 Repair on the city center’s parapet wall has moved from the Vernon Street side to the Third Street side, causing a portion of Third to be closed.

A portion of Third Street near the Ironton City Center is currently closed as repairing the building’s parapet wall has moved to the Third Street side from Vernon Street as of Monday.

“Half the block on Third from Washington to Vernon is closed,” Mayor Rich Blankenship said. “Unfortunately we have to close it for safety reasons and for the equipment needed for the repair.”

Southern Ohio Salvage and Contracting has worked on the estimated one-month repair since mid June, and although complications were found in some columns of the wall requiring an additional $5,000, Blankenship said that timeframe is still obtainable.

“I know it’s an inconvenience for some businesses, but we’re trying our best to be as accommodating as we can,” Blankenship said. “I hate it for those businesses, but it’s something we have to do. Being as safe as possible is our goal.”

Inspection of jail for later this month