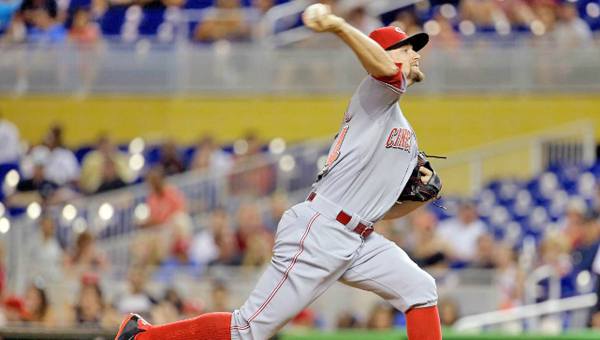 Cincinnati Reds’ pitcher Mike Leake allowed just three hits and had a season-high 10 strikeouts in a 1-0 win over the Miami Marlins on Friday. (Courtesy of the Cincinnati Reds.com)

“I guess he just doesn’t see my pitches too well,” Leake said.

Ditto the rest of the Miami Marlins. Leake allowed three hits in eight innings and had a season-high 10 strikeouts to help the Cincinnati Reds beat Miami 1-0.

Jay Bruce’s homer leading off the second inning accounted for the lone run.

“Vintage Mike Leake,” Bruce said. “To cash in on his performance was something we wanted to do. He pitched great.”

Leake (6-5) walked one and threw 102 pitches. Gordon, who leads the majors with 119 hits, struck out a season-high three times against the right-hander, each time on three pitches.

“We’re going to have to figure out Mr. Leake so we’ll be able to get him next time,” Gordon said. “He definitely pitched a great game.”

Leake improved to 5-1 in six career starts against the Marlins with an ERA of 1.33.

All-Star Aroldis Chapman gave up a single to Adeiny Hechavarria on a 103-mph fastball in the ninth but struck out the side to earn his 18th save in 19 chances.

Bruce’s 13th homer was the only run allowed by David Phelps (4-5), who pitched six innings.

“That was a tremendous pitchers’ duel,” Marlins manager Dan Jennings said. “Phelps threw the ball outstanding. Unfortunately, Leake maxed him and had an outstanding cutter going. He’s tough to square up. The kid’s a tremendous athlete.”

The Marlins went 0 for 4 with runners in scoring position. Their final threat against Leake came in the eighth when Casey McGehee, signed before the game to rejoin Miami, had a pinch-hit double with two outs. Gordon then struck out to end the inning.

“I had conviction in my pitches,” Leake said. “That’s key for me. The only bad miss I had was when I tried to overthrow a little bit with McGehee, and he made me pay.”

Justin Bour and Michael Morse each had three of the Marlins’ 13 strikeouts.

Miami and Cincinnati have combined to score three runs while splitting the first two games of the series. The Marlins have struggled to score without injured slugger Giancarlo Stanton, and they’ve totaled 12 runs in their past seven games.

The Reds totaled seven hits and won despite going 0 for 5 with runners in scoring position.

“It was a hole that I had to dig myself out of, and there’s still a lot of work to do,” he said. “I’m still not even close to where I want to be.”

Jennings was a friend of former Oakland Raiders quarterback Ken Stabler, who died Wednesday. They were from the same part of Alabama, and Jennings became a Raiders fan because of the fun-loving Stabler.

“He opened a country and western bar in Mobile about the time I turned 21,” Jennings said. “I have some fond memories of that thanks to the Snake. My wife didn’t know that side of me, or I wouldn’t be married.”

Former Reds RHP Mat Latos was scratched from his scheduled start Saturday for Miami after he bruised his right foot in the dugout during Thursday’s game. Latos had his foot against the net in front of the dugout and was hit by a teammate’s foul ball.

RHP Raisel Iglesias (1-1, 5.11) will come off the disabled list to make a spot start Saturday for Cincinnati against LHP Adam Conley, who will be recalled from Triple-A New Orleans to make his first major league start in place of Latos.

To make room for Conley, infielder-outfielder Jordany Valdespin was designated for assignment.

2 commissioners publicly say no money, no move   It is almost official. The county won’t move the jail to... read more