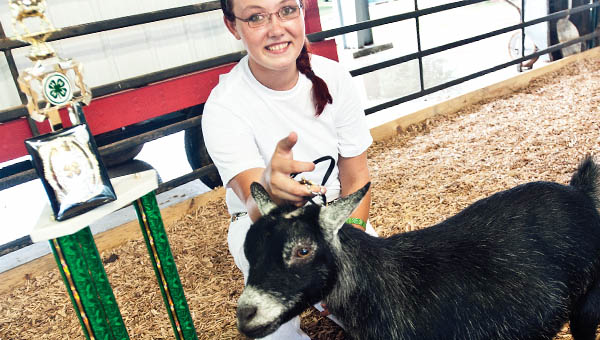 Celsey Huisman is the grand winner for pygmy goats.

ROME TOWNSHIP— All the hard work the 4-Hers who raised goats put in paid off Sunday evening as the exhibitors took their pygmy, breeding and dairy goats to the livestock arena to be judged, and the top in each category were named.

“It means a lot to be grand champion,” Huisman said. “It’s quite easy to raise them, but you have to take care of them each year.

Huisman is from South Point, has been a 4-H member for nine years and said she has won grand champion honors from the county fair twice before.

“It means a lot because I feed them and keep them at my house,” Maynard said.

Although Maynard has been in 4-H for three years, this was the first year she showed a goat at the fair.

“I’ve been raising goats for a couple years now,” Haley Pancake said. “I show up to the big shows where all the big farms compete, and I like coming to the county fair and trying my best.”

Isabelle Pancake said she likes the process of raising goats.

Twelve-year goat judge Beth Adams of Bethel takes pride in not just judging goat shows, but helping the children while she does it.

ROME TOWNSHIP — The guests of honor may have been missing, but that didn’t mean this year’s market chicken and... read more