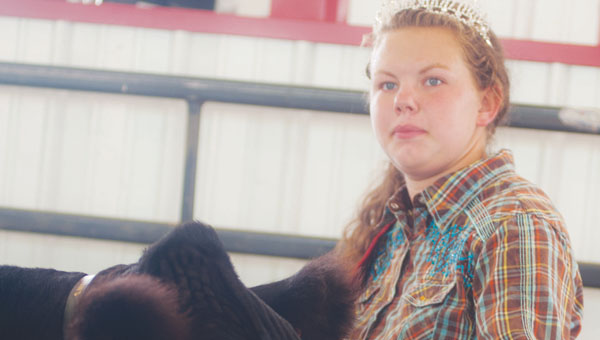 Kaylee Cade with her grand champion market steer during the large animal auction Saturday at the Lawrence County Fair.

ROME TOWNSHIP — As the bidding paddles were raised some 4-Hers shared smiles while others shed tears in a final goodbye to the animals they raised from babies at Saturday’s large animal sale.

While Lewis said she was happy with the bidding, she also felt sad to see her hogs go to market. She had two hogs at the fair this year.

Winning the bid for the grand champion hog were Producers of Gallipolis and Feed Stop.

Kara Saunders, who auctioned off her reserve champion hog, was also happy with her bids. Her 272-pound hog earned $7 per pound — a total of $1,904.

Overall, Saunders was pleased with her performance this year.

“It’s been really good,” she said. “I’ve accomplished a lot of things I wanted to. I’ve had a really good year.”

Kaylee Cade started off the steer bidding with her grand champion animal. Bidders gave $3 per pound for her 1,232-pound animal — a total of $3,696.

Karsyn Ball also got $3 per pound for her reserve champion steer for a total of $4,008.

Ball showed steers two years ago but showed goats last year. This year she decided to give steers another shot.

“They are so much smarter,” she said.

Bidder for the reserve steer was Nelson’s Processing.

Leith said he was happy with his earnings and said his favorite part of the fair this year was “showing and winning grand champion.”

Parker Rowe auctioned off his reserve champion lamb for $10 per pound. That earned him $1,260 for his 126-pound animal.

“It was a great experience,” Rowe said. “It’s always a great time up here.”

Haley Pancake also said winning grand champion for her goat was the highlight of her year at the fair.

Like many other 4-Her’s, Pancake said she planned to save her money for college.

“ I want to thank everybody for coming out and supporting 4-H,” Back said. “Especially the ones who bought my goat.”

Back said he had a good time at the fair this year and he understands the importance of not getting too attached to his fair project.

Also auctioned off was a quilt made by the Campground Quilters. The quilt was auctioned off four times, as the winning bidders re-donated it back to auction.

The quilt brought in $2,140, which will go towards the fair barn fund.

The fair board also honored longtime auctioneer Lee Johnson with a plaque for his more than four decades of service to the Lawrence County Fair.