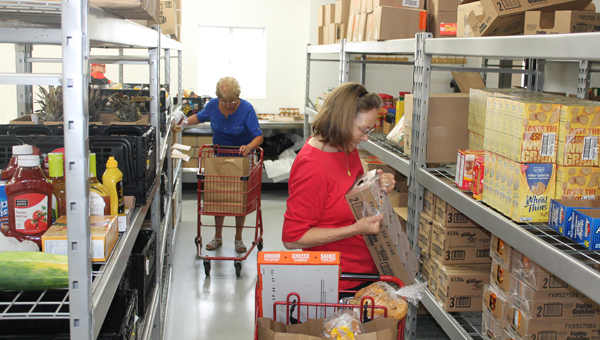 Ironton First United Methodist Church Harvest for the Hungry volunteers Bobbi Shelton (back) and Lil Hart gathering food for people Monday morning at the food pantry during a normal distribution.

Every Monday and Wednesday from 9 a.m.-noon the Ironton First United Methodist Church’s Harvest for the Hungry food pantry has a food giveaway for those in need.

“It’s the end of the month now, so it’s pretty busy,” Diane Porter, director of the food pantry, said.

Porter said on average between 35-40 people take advantage of each giveaway and that it has been as low as 30 and as high as 76.

Harvest for the Hungry purchases food from two locations; the Southeast Ohio Food Bank in Logan and Facing Hunger in Huntington.

The farmers market also donates tomatoes to the pantry during season and every August and September, Heiner’s donates 500 loaves of bread as well.

“People come in and give us their IDs,” Porter said. “Once a month I report all the different classifications and send the information back to the food banks.”

Every item that comes into the food bank is checked for a current date code and everything that is given out is current. However, Porter said if people come early, they let them go through items that are passed the expiration date.

“We don’t ever like to turn anybody away,” Porter said.

Porter praised the pantry’s volunteers and said they make it possible for the food pantry to keep going.

“We have great volunteers and we don’t like to turn volunteers away,” Porter said. “Volunteers come in every Monday and Wednesday for the food give outs and some come back to help us unload when the trucks come in.”

Members of the local Catholic community volunteer at the pantry the last two Mondays of every month and members of different groups come in and volunteer on the other days, although anyone can volunteer.

Facing Hunger Food Bank also recently had a mobile unit at the food pantry, where 211 families were served.

“The mobile unit was all Facing Hunger, so we didn’t know what we were getting,” Porter said. “We provided the place and signed people in.”

Porter said the pantry is always taking donations and money donations are greatly needed because they can make it stretch further buying from the food banks.

The Ironton Outdoor Tuesday Night Concert this week will be Carrier. Carrier performs classic rock of the 1970s and... read more