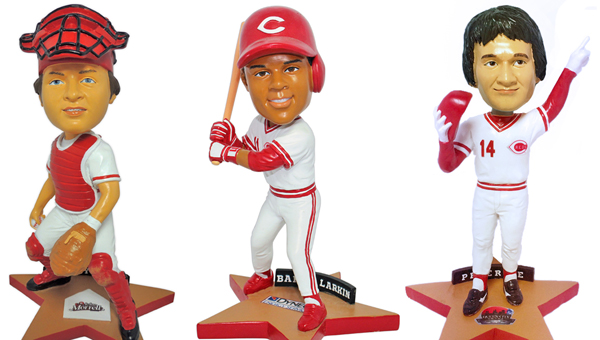 CINCINNATI — Baseball’s all-time hits leader Pete Rose will be the third and final player featured in the Cincinnati Reds “Stars of the Queen City” bobblehead series for 2015.

This first-time-ever gate giveaway of a Pete Rose bobblehead will be given to ALL FANS in attendance at the Reds vs St. Louis Cardinals game on Saturday, September 12 at 1:05 p.m..

The Pete Rose bobblehead is presented by Queen City Sausage, as part of Super Saturdays at Great American Ball Park.

Fans have many options to purchase tickets for the Sept. 12 game:

Rose joins Johnny Bench (May 16) and Barry Larkin (June 6) as the three “Stars of the Queen City” bobbleheads in the 2015 collectible series.

Fans may visit the Reds Hall of Fame & Museum to see the Stars of the Queen City exhibit featuring period artifacts representing each of the 100 different players in Reds history that have been selected to represent Cincinnati at the MLB All-Star Game.

Cincinnati first baseman Joey Votto watches the flight of his ball as he hits a three-run homer in the sixth... read more