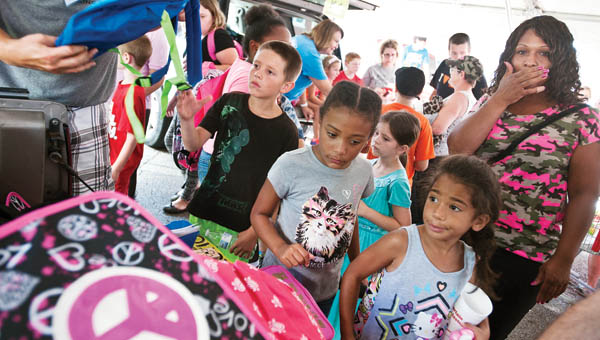 Area children from South Point look through an array of backpacks during the Tools4School event Saturday in Ironton.

Six-year-old Leland Ackison bent down to get a look at himself in the sidewalk mirror with his new flat top hair cut while Jha’liah Johnson, 3, was in the barber chair getting much of the same.

Their mother, Heather Murphy of Ironton, watched from the sidelines as the latest addition to the annual Tools4Schools event on Center Street — free haircuts — was going on.

A team of 11 from Ambiance salon in Ashland set up temporary shop near where close to 2,000-filled backpacks were expected to be given out for students from kindergarten to 12th grade.

This was the 11th year for Tools4School, a school supply giveaway started by St. Paul Lutheran Church. Right at the intersection of Center and Sixth streets, near St. Paul’s, a blue tent was erected where the blocks-long lines of parents and children picked out their backpacks.

From that first giveaway in 2004, the Saturday morning event has metamorphosed into a community festival taking over a block of Center Street with inflatables, food and informational booths.

Seeing it for the first time is the new pastor at St. Paul’s, the Rev. Wayne Rollins.

“Wow,” he said. “I’m just watching this happen. It works like a well-oiled machine. You look around here and there is the Methodist Church, the Episcopal Church, the Presbyterian Church. The whole community is coming together.”

Also participating were 3-C Church, First Church of the Nazarene and All Saints Lutheran in Worthington.

This was also the first time for the Rev. Deacon A.J. Stack, resident clergy of Christ Episcopal Church, manning the table where 1,300 pairs of socks were set to be given away.

“The turnout here is amazing,” he said. “It is not just a giveaway. It is about having fun and serving the community.”