Manziel: It’s all about football 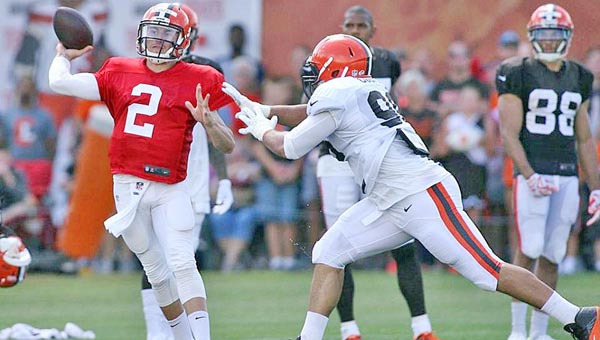 Cleveland Browns’ QB Johnny Manziel (2) throws on the run in practice. Manziel said his total focus now is on football. (Photo Courtesy of The Cleveland Browns)

After a failed and flawed rookie season that was followed by a 10-week stay in a rehab facility, Browns quarterback Johnny Manziel said he believes he’s grown personally and professionally. Manziel said he’s committed and beginning to find his stride after a stumbling start in the NFL.

Manziel spoke following Thursday’s practice for the first time in training camp and said he’s found comfort in not being the center of attention. Last summer, the 2012 Heisman Trophy winner whose weekend party-hopping made headlines, had his every move on the field inspected and analyzed.

These days he’s just one of the Browns.

“It’s nice to come out here and wear any kind of shoes that I want and that’s not the main story of the next day,” Manziel said, smiling. “You can look back at it now and laugh a little bit, but expectations in my corner or in the hype and everything is a little bit tempered and a little bit down.

“And that, for me, is a good thing. Now I can just come out and play and do my game and really get to learn — because that’s what I needed to do.”

Manziel has strung together two solid practices, and following Thursday’s workout Browns coach Mike Pettine said the second-year QB will likely get some snaps with Cleveland’s starters on Friday when the team scrimmages at Ohio Stadium in Columbus.

But unlike last year, the 22-year-old said he’s not worrying about his place on the depth chart.

“I want to show that I can really go out and play and that I’m making improvements, that I’m making strides to get better,” he said. “And then from there on, coach Pett, everybody else, they make that call. I’m not getting too caught up in it because last year I think that was probably a little bit of my problem — getting caught up in the starters and the reps with the ones and the backups.

“I’d never really been a backup before. So this year, I’m definitely just trying to take a little bit different approach, and if I take care of my business and show that I’m getting better and go out in the preseason and play well, then who knows what’ll happen?”

The Browns have been pleased with the new and improved Manziel. He’s working hard, studying more and showing progress. The change is noticeable.

“When you come in every day with a great attitude and you work and it’s important to you, you can’t help but get better,” Pettine said. “I’m just happy for him that he’s getting the results on the field, and the guys around him sense that as well.”

“It’s night and day difference from last year,” he said. “I’m pleased with just the progression of getting better and coming out some of these days and having a high completion percentage and getting the ball where it needs to go. Now it’s just little things that are keeping me from really taking another step.”

The Browns have pledged their full support to Manziel, who has not disclosed the reason he checked into a Pennsylvania facility specializing in alcohol and drug abuse. The team has not given up on a grateful Manziel.

“It’s incredible,” he said of the Browns’ backing. “I said this at the end of last season that it would be a little absurd for people to give up on me after the amount of time that I did play. I was a rookie and I went through a lot of lumps, I took a lot of lumps. I think from when the season ended, I did what I needed to do to try and put myself in the best position to make sure that I was good in every facet of my life moving forward.”

NOTES: QB turned WR Terrelle Pryor (hamstring) will not play in Friday’s scrimmage at Ohio State. It will be his first visit to the stadium he called home for three years before leaving amid an NCAA investigation that led to sanctions against the Buckeyes. … An unidentified drone hovered over the field during practice, prompting Pettine to joke that it might have belonged to the “Ravens or Steelers or Bengals.”

CINCINNATI (AP) — Rain forced the Bengals to move their practice from their outside fields to Paul Brown Stadium on... read more