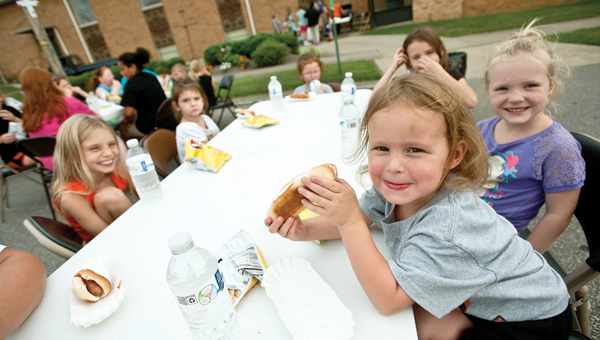 Kenadee Sharp, far right, enjoys a hotdog with her friends while taking part in the street fair Friday evening at the First Baptist Church in Ironton.

Ten-year-old Brock Freeman yanked back the yellow rubber band on a slingshot almost too big for his hands, smacking the pellet right into a blue stuffed elephant perched on the stand. The elephant had no choice but to surrender. For a second the teen manning the Angry Birds booth ducked, then quickly recovered, handing out Brock’s prize –— a box of candy.

That was just one of the chances to have fun at the inaugural street party put on by First Baptist Church of Ironton on Friday evening. For three hours Vernon Street from Fifth to Fourth streets was filled not with traffic, but inflatables, picnic tables and families eating hot dogs and watching children having a good time.

Inside the Faith and Fitness Center was a carnival atmosphere with booths for ring toss, face painting and “rubber ducky”fishing. As children were playing, adults were at the other end of the center filling up bags of clothing off nine tables of items donated by church members.

The idea for the party came out of a deacons meeting at the church a few weeks ago.

“We were talking about how generous and good God is,” Eric Barnes, pastor, said. “Let’s have a street fair, something good for the kids.”

That follows the basic philosophy of the church, Barnes said.

“We are people who know and show the presence of God,” he said. “We want to do extra generous and kind things.”

CAO offers programs for people of all ages