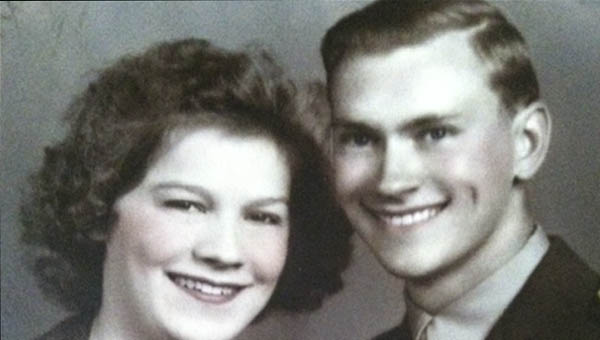 What’s in a name? A lot if you’re Ray O’Conor. Until a few years ago, O’Conor, a former bank president and CEO, thought his first name was given in honor of an uncle on his father’s side of the family. It turns out O’Conor was mistaken.

On his mother’s 80th birthday, O’Conor learned the story of Clarence “Raymond” Stephenson, his namesake and his mother’s first husband, an Ironton native who died serving his country in World War ll.

When Helen, O’Conor’s mother, asked him to read a love letter to her by her first husband, O’Conor connected to the past.

“It was sent to my mother on her 19th birthday,” said O’Conor. “It’s just the sweetest letter you ever read.”

“Every year on her birthday since Raymond died, she pulled out that letter,” said O’Conor.

The letter was a reminder of the man Helen met and fell in love with in New York City’s Central Park in 1942.

“The more I learned the better the story got,” said O’Conor.

On Saturday, Sept. 19 O’Conor will come back to the city Raymond loved to talk about at a 2-4 p.m. book signing at the Briggs Lawrence County Library in Ironton.

“It will be another emotional visit for me,” said O’Conor.

O’Conor will sign copies of “She Called Him Raymond,” which was recently nominated for the Pulitzer Prize for non-fiction.

“I would hope folks come out to hear a very good story,” said O’Conor. “I’m not here to sell books. I’m here to tell a story.”

Writing the book required O’Conor to reach out to people who knew Raymond. Keith Clinton, the single surviving crew member of the crash that killed Raymond, was one of O’Conor’s first stops.

“He told me a lot of great stories,” said O’Conor. “(He) had original handwritten flight records of the mission.”

Traveling to Akron, to visit Raymond’s sister, Ruth, O’Conor gained a deeper connection to his namesake and got to see the world through his eyes after she gave him Raymond’s diary.

“No one knew he kept a diary,” said O’Conor. “He recounted the day he met and fell in love with my mother.”

In his diary, Raymond wrote, “I met a lovely girl (Helen) in Central Park…I think this will change my future life.”

When the couple met, Helen, raised in a family of Irish Immigrants living in the squalor of Hell’s Kitchen, New York, was not yet 17. Her mother was against her marrying so young. Raymond promised that he would come back to claim his bride and on her 18th birthday, he did.

Writing the book taught O’Conor things about his mother that he didn’t know.

“I’m amazed at how little I knew about the woman who raised me,” said O’Conor.

After Raymond’s body was returned to O’Conor’s mother, she chose to have him buried in Woodland Cemetery in Ironton.

“She knew how much Raymond loved Ironton,” said O’Conor. “The best stories are about people who lived extraordinary lives. Helen and Raymond’s story is one of those stories.”