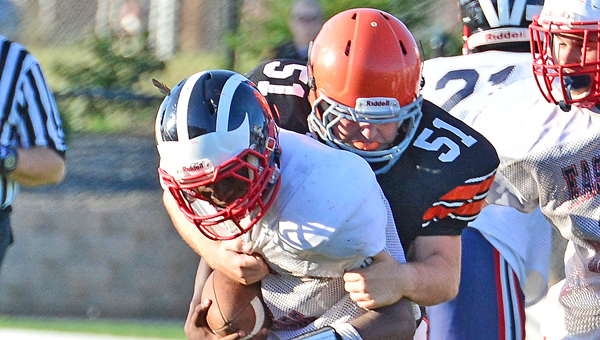 What a way to get it all started.

Two of the premier area football programs will again meet in the season opener on Friday as the Ironton Fighting Tigers host the Wheelersburg Pirates at Tanks Memorial Stadium.

Both teams reached the Region 17 Division V playoffs last season and are filling holes in their lineups.

The Pirates were 11-2 last year and won both the regular season and playoff meeting between the two teams.

But they’ll have a new man at the helm as senior Kyle Davis takes over at quarterback for the graduated Austin May.

But Davis was a receiver last season and the backup quarterback.

A key returnee is running back and receiver Chasen Burk. Also heading the offensive line is senior Sam Hall (6-4, 285).

Vass said his biggest concern is playing the first game against a quality team.

“We’re both in the same situation. You’re still not sure who can do what or how the young guys will react who haven’t been under fire in a varsity game,” said Vass.

Wheelersburg has found plenty of replacements on the offensive line. The Pirates will average 278 pounds per man from tackle to tackle.

“Their backs aren’t overly big, but they are athletic and have good speed. When you put them with that big offensive line, they’re pretty effective,” said Vass.

Most of the offensive starters flip over to defense led by the linebacking corps of Carmichael, Hatfield and Jake Darnell (6-0, 175).

All Ohio Valley Conference games will begin at 7 p.m. this season.

Chesapeake, Fairland and Portsmouth will play all their games — league and non-league — at 7 p.m.

OSU’s Brown out for season