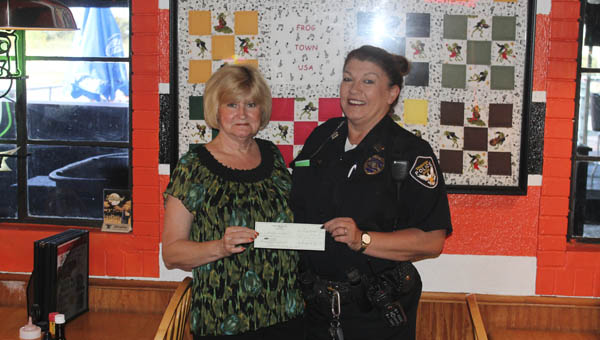 Frogtown owner Darlene Rutledge give a donation check to Captain Pam Wagner of the Ironton Police Department for the Fraternal Order of Police.

Every year when the motorcycles roar into town for Rally on the River, hundreds of campers follow, setting up in various locations in the city of Ironton.

One easy-to-spot location is across from Frogtown on South Third Street.

The city allows the owners of Frogtown, Darlene and Mike Rutledge, to use the empty space to rent out to campers, but it’s not for their own benefit.

This year, as in years past, Frogtown donated the money collected from the campsite to the Ironton Fraternal Order of Police — $1,000.

James “Stubby” Orasco, cook at the restaurant, said they have made the donation for as long as the rally as been going on.

“They (the police) do us a great job,” Orasco said. “They do great for the community. It’s the least we can do.”

Captain Pam Wagner, president of the FOP, said the donation is much needed.

“It’s phenomenal,” Wagner said. “We don’t have a lot of money. We love sponsoring Little League teams, anything with the youth of our community. We get letters from people who ask for donations all the time. We can’t donate all but we do as much as we can.”

The FOP also donates to the Friends of Ironton and the Shop with a Cop program. The organization also works in the schools.

“We’ll take all donations,” Wagner said. “We just want to encourage everyone to get out and be active in the community. Anything that involves kids. They are our future and we want them to have a positive reaction and positive experience when it comes to dealing with law enforcement.”

Standoff over gay marriage licenses wears on, despite court…