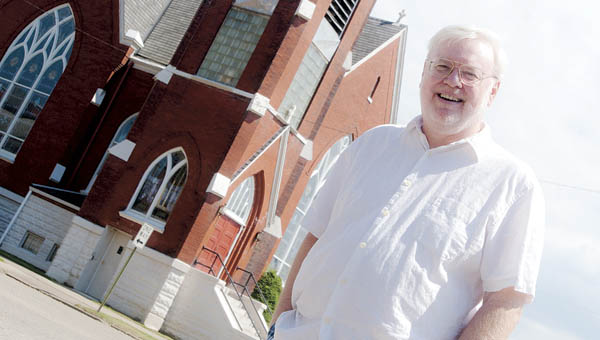 From music to the pastorate, St. Paul’s minister has unique journey

For Wayne Rollins the journey from becoming an Episcopal priest and coming to Ironton to serving as the minister at St. Paul Lutheran Church has been anything but ordinary.

“My background was in church music,” said Rollins, a Charleston, West Virginia native. “I was always interested in…the theological message of the music.”

Rollins received a degree in organ performance and played the organ at All Saints Episcopal Church in Portsmouth on Sundays before entering into the ministry in a different capacity.

“No one who pulled out as many stops (on the organ) as I did on Sundays can be accused of being bashful,” said Rollins. “A lot of my musical training comes into play when I’m in front of a group.”

While Rollins still plays the organ “just for fun,” these days his focus has shifted to serving as a minister.

Attending the Methodist Theological Seminary in Ohio, near Columbus, Rollins prepared for the ministry. Following seminary Rollins was ordained as an Episcopal priest.

Rollins recognizes that his journey in the ministry hasn’t been typical, but said that churches are changing to find ways to relate to one another even if they have differences.

“We’re finding ways, things that we hold in common,” said Rollins. “I see the church as going through a reformation.”

Before moving in March to serve at St. Paul’s, Rollins served as an Episcopal priest in Portland, Maine and Charleston, West Virginia.

Rollins is the first on-staff minister to serve St. Paul’s since their last minister left.

“He left a couple of years ago,” said Rollins. “It was hard to get someone to live here.”

Living in the parsonage at St. Paul’s, Rollins devotes his time to the church and spends a few evenings a week serving as a chaplain at St. Mary’s Medical Center in Huntington, West Virginia.

When Rollins came to Ironton, he spent time wandering around the community to get acquainted with the people and immediately noticed St. Paul’s dedication to serving others through its various programs.

Serving others and showing them the love of God is the philosophy behind Rollins’ ministry.

“Primarily (I want) to tell anyone and anybody that God loves them,” said Rollins. “God loves you.”

Rollins’ church is dedicated to showing others love.

“We do it through helping people getting food to listening to someone’s story,” said Rollins.

St. Paul’s is “a big family” where young and old show their care for each other, said Rollins. “Anybody is welcome to come on Sundays.”