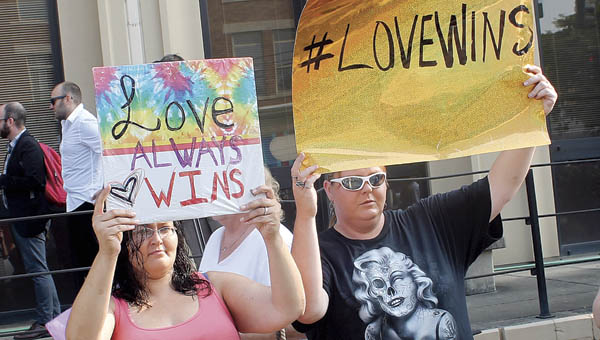 ASHLAND, Ky.­­ –– For Ashland resident Stephany Yates, the contempt of court hearing of Rowan County, Kentucky clerk Kim Davis who refuses to issue marriage licenses to gay couples hits close to home. Yates and hundreds of other protestors on both sides of the issue stood outside of the Carl D. Perkins Federal Court Building Thursday morning prior to the hearing.

“As a happily engaged lesbian, I would never ever wish anyone else to have their rights denied,” Yates said. “I’m here trying to show my support and fight for my own rights.”

After repeatedly denying marriage licenses to the LGBT community in Rowan County due to her religious beliefs, even though the Supreme Court ruled in favor of gay marriage earlier this year, Davis appeared in federal court in front of Federal District Court Judge David L. Bunning.

“I support that everyone needs to have equal rights,” Alicia Dennison, of Ashland, said. “This isn’t a religious issue. This isn’t a gay issue. She was elected to follow the laws and she’s not, so resign.”

Despite the Supreme Court ruling, those in support of Davis believe she is within her rights to deny marriage licenses to gay couples citing Scripture and Davis’ religious beliefs.

“I’m here to support Kim because of what the good book says,” Randle Foreman, of Princeton, Kentucky, said.

Ashland resident Sammy Taylor feels the same, as she stood with her sign that read, “I support Kim Davis.”

“When God judges us and asks us why we didn’t do anything about this, I can say I did,” she said. “God died for us. We are here to support him and stand up for him.”

For Ashley Hogue and Sue Schneider, both of Ashland, Davis does not represent their religious views.

“I’m here to represent a loving side of Jesus, the Jesus I know,” Hogue said. “I want to stand with the people that have been discriminated against in support of them. It’s been so hard on them.”

“I think God loves everyone,” she said. “Love should overcome everything.”

In the courtroom, Judge Bunning ruled against Davis. She was then taken into custody by the U.S. Marshals to the Carter County Detention Center until she agrees to issue the marraige licenses.

Gay couples will try to wed as clerk sits…