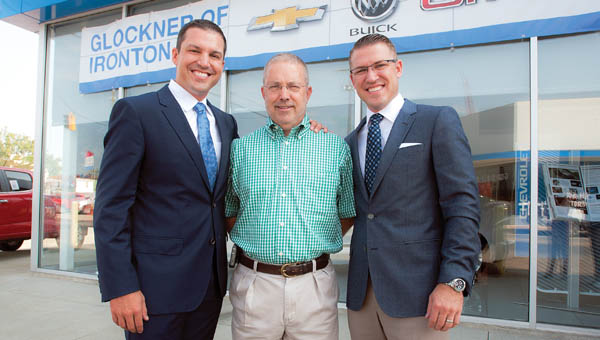 General Motors approved a buy-sell agreement between Tim Glockner and Bob Clyse for Glockner to take over Clyse’s Chevrolet-Buick-GMC dealership on Third Street, a business that has been in the Clyse family for more than 40 years. The dealership is now named Glockner of Ironton.

“Consolidations are going on all over the country and they seem to be the way of the future,” Clyse said. “We think we picked a good family to merge with and we thought it was a good time to do it.”

The deal was made official this past Wednesday, and the transition from Clyse to Glockner has gone smoothly.

“They’ve taken good care of our employees and customers, which was the most important to us,” Clyse said.

Glockner said the entire staff has been kept under the new ownership.

“We retained all 46 employees, which was important to Bob and Sissy,” Glockner said. “Without the team, it’s just a building with a bunch of cars. It wouldn’t be worth anything without the team.”

Glockner added that along with the retained staff, he hopes to add at least five more people for the business department, sales and technicians.

A couple of the changes Glockner said will be made include centralized accounting so that everything is done one way, what Glockner calls “The Glocker Way” and the old showroom, which is a storage room now, will be turned into a certified pre-owned showroom.

“Bob and Sissy could have sold to anyone. When they approached us, we were honored to carry on their good work in Ironton,” Glockner said. “We promise to be good stewards of this dealership that they built.”

Authors slated to give readings