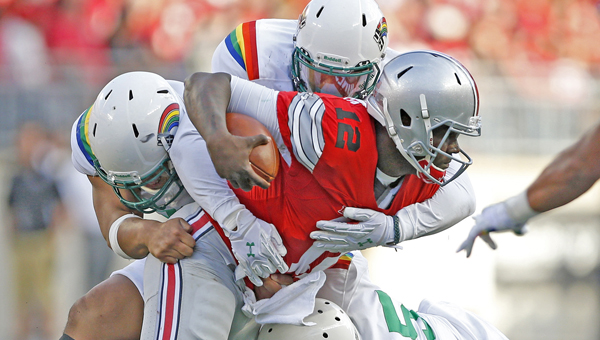 Ohio State quarterback Cardale Jones (12) is taken down for a sack by Hawaii linebacker Makani Kema-Kaleiwahea (55) and teammates in the third quarter at Ohio Stadium in Columbus on Saturday. Ohio State won, 38-0. (MCT Direct Photo)

That has not changed at Ohio State after neither quarterback was particularly impressive during one of the more uninspiring 38-point victories a team can have.

This is the world in which No. 1 Ohio State lives: a 38-0 victory against Hawaii just a few days after a rousing Monday night road win at Virginia Tech gets the locals the jumpy. And the focus inevitably ends up on the quarterbacks.

Jones went 12 for 18 for 111 yards against the Rainbow Warriors on Saturday. Barrett went 8 for 15 for 70 yards. Neither threw a touchdown pass. So fans online and on talk radio already are wondering if the right player is starting.

“The approach I’ve taken is Cardale started,” Meyer said. “He’s the starting quarterback. I met with him yesterday. J.T. has not beat him out yet. He’s going to continue to have opportunities to do that because J.T. is a very good player and Cardale’s got to perform.”

While Meyer was not thrilled with his quarterbacks, he seemed more perturbed by the play of his offensive line. The Buckeyes were billed as having one of the top lines in college football, led by tackle Taylor Decker and guard Pat Elflein, two of the nation’s best at their positions.

Decker said Hawaii’s defensive fronts and blitzes gave the line problems. Having a short week to prepare and going from playing Virginia Tech’s 4-3 to the Rainbow Warriors’ 3-4 alignment did not help.

“There’s all the excuses there you could use. We’re not going to use those. We expect a high level of execution regardless of a short work week and a quick turnaround from a Bear defense to an odd defense,” Decker said. “We just got to get better. I didn’t necessarily expect it to be a finished product this early in the season. I did think we played a lot better against Virginia Tech than against Hawaii.”

Meyer said he refused to allow his players to get down after a victory, but it was apparent the Buckeyes can use the sluggish outing as a teachable moment.

“We definitely were flat,” Decker said. “I’m not going to name names across the team in general, but I just think some guys weren’t as ready to play as they should have been.”

Meyer made it clear last week after getting back to Columbus in the wee hours of last Tuesday morning, he was not happy about having to get his team ready for a Saturday afternoon game. Getting back to a normal routine should help the Buckeyes.

“So happy about that,” linebacker Darron Lee said.

There was also plenty to be pleased about from the Hawaii game. The defense dominated, especially the secondary. Meyer liked the way Ezekiel Elliott ran.

Still, after eight months of talking about Ohio State’s quarterbacks, that conversation is not going to just go away.

“I think we have two excellent quarterbacks, and I expect them to play very well,” Meyer said. “Neither of them played very well Saturday. Disappointment, I don’t like that word. We’ve just got to better prepare them.”