Man gets 4 years 11 months in prison for school threat 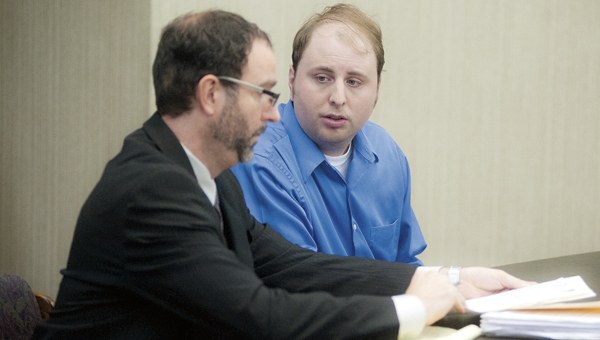 Kyle Parramore talks with his attorney before sentencing Wednesday.

The question posed and ultimately answered by the attorney representing the Florida man who threatened a local elementary school may not be what parents and their children want to hear, but it’s the only explanation they are going to get.

The question was: Why did Kyle Parramore, 24, use an anonymous Internet forum this past September to communicate a threat of shooting up Ironton Elementary School, causing the complex that houses both the elementary and middle schools to close, as well as other schools districts to be on lock down?

“I think alcohol played a role in that,” according to Adam Burke, attorney for Parramore. “I think the circumstance, late at night, on the Internet, he got carried away. That is no excuse for what he’s done but it is the reality.”

“There is a disclaimer on the website that these things are fictional and should not be taken to be true, however, despite that disclaimer, there is a culture on this website that encourages folks to engage in hoaxes and try to get folks to buy into these things,” Burke said. “Unfortunately, Mr. Parramore’s conduct started as fantasy and went well beyond fiction to actually making phone calls to the sheriff’s office, doing things that took him out of the fantasy realm, and that’s why we’re here today.”

Parramore was sentenced Wednesday in Lawrence County Common Pleas Court to four years and 11 months in prison for a second-degree count of inducing panic and a fourth-degree count of attempted making a terroristic threat.

The felony of the fourth degree was reduced from a third-degree count of making terroristic threats. That charge had been dismissed but was reinstated Wednesday.

Parramore was arrested in Florida in September and extradited to Lawrence County following a post on an anonymous Internet forum that stated he was going to “shoot up” the elementary school.

“I take full responsibility for the mistakes I have made,” Parramore said. “I can’t tell you how much I beat myself up over this everyday. I want you guys to know, not only has this experience changed my life for the better, but it has probably saved my life as well.”

Parramore admitted to being an alcoholic and said he had already made efforts to turn his life around.

“Now through the Lord, I would like to dedicate my life to helping others and educating people and just being involved in ministry,” he said. “I hope some day this community and this court can forgive me. I know I’m not a bad person but I know I made a mistake. I hope I can have a second chance at life and I can prove to everybody down here that people can change and they can be better.”

As the commission gears up to work on the 2016 budget, one expense it will have to factor in won’t... read more