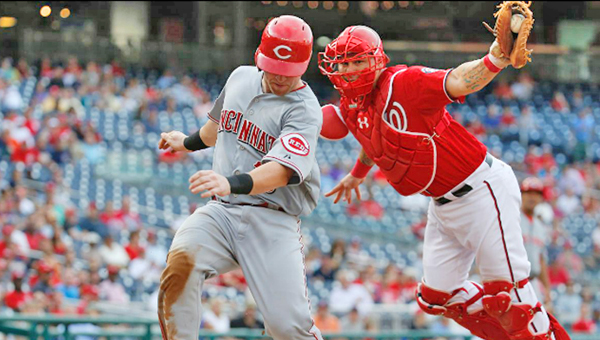 Cincinnati’s Tucker Barnhart scores a run in the eighth inning as he avoids the tag by Washington Nationals’ catcher Wilson Ramos. Barnhart singled earlier in the 8th inning for the Reds first hit against Max Scherzer. Cincinnati lost 5-1. (Photo Courtesy of The Cincinnati Reds.com)

WASHINGTON (AP) — It’s been 44 years and more than 7,000 games since the Cincinnati Reds were no-hit in a regular-season game, the longest active such streak in the majors, and Washington Nationals pitcher Max Scherzer came within five outs of ending that distinction.

Scherzer did not allow a hit until Tucker Barnhart singled to left on a 1-2 count with one out in the eighth, and Washington went on to a 5-1 victory over Cincinnati.

“Luckily, I put a good swing on it,” Barnhart said. “Max was great all day. It was obvious by the way he made us look at the plate. But that’s him: He’s one of the best pitchers there is.”

That hit came on Scherzer’s 105th pitch, and fans at the stadium rose to salute the right-hander with a standing ovation. To that point, the Reds only had three baserunners, on walks in the first, third and seventh innings.

Barnhart wound up scoring on Skip Schumaker’s single, the only other hit allowed by Scherzer (13-12), who left after the eighth.

Before the eighth inning, Schumaker came closest to getting a hit off Scherzer — and he did so twice. In the third inning, left fielder Tyler Moore laid out for a diving catch, and in the sixth, second baseman Dan Uggla dropped to a knee to grab a liner.

“Schumaker was great all day,” said Reds manager Bryan Price, whose club, like the Nationals, will not be participating in the playoffs.

“There weren’t a lot of great at-bats against (Scherzer). He just had that type of stuff,” Price said. “It was about as good as I’ve seen him live.”

Scherzer’s fastball was consistently above 95 mph and occasionally reached 99 mph.

“When he needed an out,” Price said, “he just reached back.”

He already threw a no-hitter at Nationals Park in 2015, on June 20 against Pittsburgh, when he was one strike from a perfect game before plunking a batter with two outs in the ninth inning.

Did he ponder getting no-no No. 2, which would have made him the first pitcher with two regular-season no-hitters since Nolan Ryan in 1973?

“I thought it had the makings of it,” Scherzer said.

The Reds haven’t been no-hit in the regular season since Philadelphia’s Rick Wise did it in June 1971. But Cincinnati was held without a hit in the playoffs by Philadelphia’s Roy Halladay in Game 1 of a 2010 NL division series.

NO HARPER, NO PAPELBON

LF Bryce Harper, a leading NL MVP contender, didn’t play in Washington’s home finale. Manager Matt Williams said that was because of Harper’s “part in the altercation” with teammate Jonathan Papelbon in the dugout during a game Sunday. Papelbon, meanwhile, is done for the season: He will miss four games because he was suspended by the Nationals for the episode in which he grabbed Harper’s throat, and the other three games because he dropped his appeal of a Major League Baseball ban for throwing at an opponent’s head last week.

Scherzer collected his 13th hit of the season, setting a career high, with a single in the third, and then added another single in the fourth.

Reds: Open a three-game series at home against the Chicago Cubs on Tuesday. The Cubs have clinched an NL wild card.

Nationals: Open a three-game series at Atlanta on Tuesday. Both NL East clubs have been eliminated from playoff contention.

Unbeaten Bengals have chance to take control of AFC North

CINCINNATI (AP) — The Bengals are in rare territory for them: Unbeaten after three games with an early chance to... read more