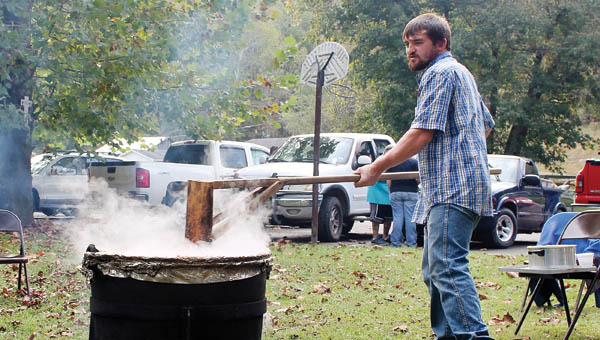 The scent of apple butter cooking over an open fire on the side yard of Rock Camp United Methodist Church filled the air Monday.

For approximately 50 years, the church has made and sold apple butter each fall.

“Church members, volunteers from the outside and anyone who wants to help helps out with making the apple butter,” Shirley Loevenguth, member of Rock Camp United Methodist, said. “We start out around 6 in the morning and don’t get done until at least midnight.”

“People call or stop by to pick it up,” Loevenguth said. “Mostly all of it is already sold.”

Although selling the apple butter benefits the church, the tradition is more about the fellowship that it brings than anything else.

“We make a few dollars, but that’s not really that important to us,” Rock Camp United Methodist lay leader Wayne Wise said. “The main thing is that people get together and we talk to people in the community that we don’t see that often.”

Over the course of the day, between 20-30 people visit and help out with the event.

Case in hands of jury