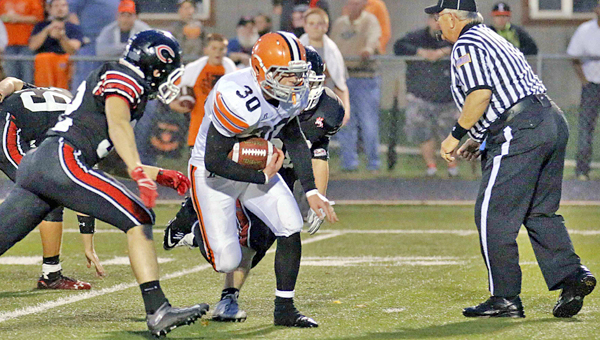 COAL GROVE — It was gut check time and it checked out pretty well.

After Coal Grove tied the game with 5:48 to play, Ironton answered with a 60-yard, 11-play scoring drive and then Jake Isaac’s clutch interception at the 6-yard line sealed the Fighting Tigers’ 13-6 Ohio Valley Conference win on Friday.

The two teams waged a defensive battle in a game for sole possession of first place in the OVC.

“We had a great defensive effort and we got some gutty performances from Andrew Barker and Desmond Young. They’re seniors and when the game was on the line, they stepped up and made the plays you expect from your seniors,” said Ironton coach Mark Vass.

Coal Grove’s offense had been stymied for more than three quarters, but they got the ball back at their own 38 early in the fourth quarter and began a eight-play scoring drive to tie the game

After a 2-yard gain, Rutherford was being tackled for an 11-yard loss but Ironton was called for another facemask penalty that put the ball at the 11.

Jacob Clark ran for 3 yards and an offside penalty moved the ball to the 4. Two plays later Rutherford went the final yard to tie the game with 5:48 to play.

But Travis Carey blocked the extra point attempt and the game remained 6-6.

Ironton (3-4, 3-0) appeared to be on a mission on its next possession, driving 60 yards in 11 plays capped by Young’s 1-yard scoring run with 1:04 to play. Tre Neal kicked the conversion.

Young had seven carries for 37 yards in the drive and Barker three carries for 23 yards. Young finished with 22 rushes for 105 yards and Barker 14 attempts for 70 yards.

Rutherford scrambled for 3 yards but Jake Isaac intercepted a pass at the 6-yard line to end the threat and seal the win for Ironton.

Isaac also had an interception to end the first half.

“We had guys making plays all night and Jake made two of the biggest plays, especially that last interception,” said Vass.

“Our defense had an outstanding game. We didn’t finish our drives on offense and get any kind of a cushion, and when you do that you let a team hang around and it only take one big play and they can beat you. Fortunately, our defense kept making big plays,” said Vass.

Ironton forced a three and-out to start the game and used a nice punt return by Garrett Carrico and a 15-yard penalty to get the ball to the Hornets’ 33.

A 5-yard penalty helped stifle the drive and forced a 26-yard field goal attempt by Neal to make it 3-0.

Ironton stopped the Hornets next series and got the ball at their own 49.

The drive went 11 plays and stalled at the 12-yard line where Neal booted his second field goal of the game, hitting a 28-yarder as the quarter ended and it was 6-0.

“We had some penalties and missed assignments that took us out of scoring position, but give a lot of credit to Coal Grove. They played hard. There were times when it looked like we were going to put the game away and they wouldn’t quit,” said Vass.

Next Friday, Ironton entertains Rock Hill in a key OVC game while Coal Grove hosts Fairland in a league contest.

Jim Walker jim.walker@irontontribune.com   PROCTORVILLE — The Chesapeake Panthers were a model of efficiency. Chesapeake had five possessions in Friday’s... read more