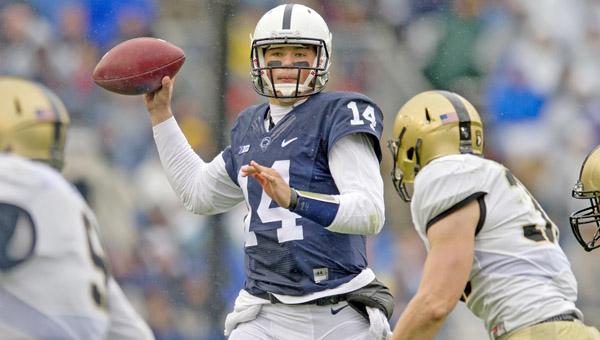 Quarterback Christian Hackenberg (14) is the key to the Penn State offense when they face the Ohio State Buckeyes Saturday night in Columbus. (MCT Direct Photos)

COLUMBUS (AP) — Penn State’s Christian Hackenberg isn’t from the same mold as the previous two quarterbacks who gashed the defense for big runs.

But that won’t make life any easier for the top-ranked Buckeyes against the Nittany Lions in Ohio Stadium on Saturday night.

In the past two games Indiana backup quarterback Zander Diamont ran 79 yards for a touchdown against the top-ranked Buckeyes and Maryland’s Perry Hills breached the defense on a 75-yard run in addition to throwing a 52-yard touchdown pass.

“There’s nothing that’s happened to us so far this year that’s not correctable,” Ohio State co-defensive coordinator Chris Ash said.

He noted that although Hills totaled 170 rushing yards, 150 of that came on scrambles.

“We have to do a better job of containing the quarterback,” Ash said.

The run by Diamont was enabled by poor execution.

“We had a missed tackle and lost leverage on that one,” Ash said. “It had nothing to do with a scheme or fundamentals.”

In the past two games the Buckeyes (6-0, 2-0 Big Ten) faced an option quarterback they weren’t expecting. Diamont replaced the injured Nate Sudfeld and Hills had not started in the previous three games for Maryland.

“One thing we did a good job of is responding and making adjustments because we saw some things that we didn’t expect to see,” Ohio State linebacker Joshua Perry said.

The Buckeyes have a better idea what they’re getting from Hackenberg, a junior who has started the past two seasons against them. He’s passed for 1,086 yards with seven touchdowns and two interceptions this season.

“We know we’ve got a kid in there who’s got a pretty good arm, done some great things,” Perry said.

But just as the Buckeyes prepare for Hackenberg the passer, he had touchdown runs of 1 and 5 yards vs. Indiana last week, jokingly drawing comparisons by his coach to OSU quarterback J.T. Barrett.

“Hack is competing right now with Barrett to be the No. 1 dual-threat quarterback in the Big Ten based on last week’s performance,” Penn State coach James Franklin said.

Perry feels the Ohio State defense will be ready.

“We’re probably going to see something we haven’t seen before,” he said. “We have to be on the lookout, keep our heads up. We have to be adaptable. That’s going to be huge.”

The Buckeyes have yielded 11 plays from scrimmage (nine of them passes) that have gone for 20 or more yards.